29 replies to this topic

I like stories, legends, and a tsuba that tells one. So of course I fell for this tsuba, even though by decision I shy away from smaller tsuba. Really glad I did. Arrived yesterday, picked up today at Post Office. Had fun all evening so far in study.

A short link to tell the tale of the Minogame in Japanese Culture (most probably know it, but it was new to me):

"The minogame is said to live at least a thousand years (with some living up to 10,000 years!) and have a long, hairy tail, which is actually seaweed and algae that have grown on its shell due to its ripe old age! It has very similar to the real-life common tortoise, which can live for hundreds of years. In Japanese culture, the minogame represents longevity and wisdom, and is a long-revered symbol of both. In art, it is often shown with other gods and symbols of longevity, such as the crane, or Taoist deities such as Jurōjin. The minogame is also depicted with the Three Jewels, which represent fortune."

This work is by Miyake Jiryusai Tomohide, son of Miyake Terumitsu, Yokoya School (was some confusion in Haynes index on this point).

nihiki-minogame no zu tsuba (⼆匹蓑⻲図鐔) ‒ Tsuba depicting two old turtles with seaweed growing on their backs
Signed: Jiryūsai Tomohide + kaō (⾃⽴斎友英「花押」)
Oval shape (tatemaru-gata), of shakudō with ishime ground, takabori relief, sukisagebori engravings, zōgan inlay, iroe accents, angular rim with some roundness (kaku-mimi ko-niku)
Size: 70.6mm X 66mm X 4.7mm
I am super excited about this piece, it's a stunner in hand. Detail work and accents/inlays are wonderful to look at. I don't want to over talk it. Only negative (knew this going in, so was my choice) as it's shakudo, there is some tarnish (verdigris?) in some areas. I am fully prepared to have this restored if it can be done (Ford Hallam) but it's wonderful right now and maybe dehydrate then protect with ren wax could be an option. 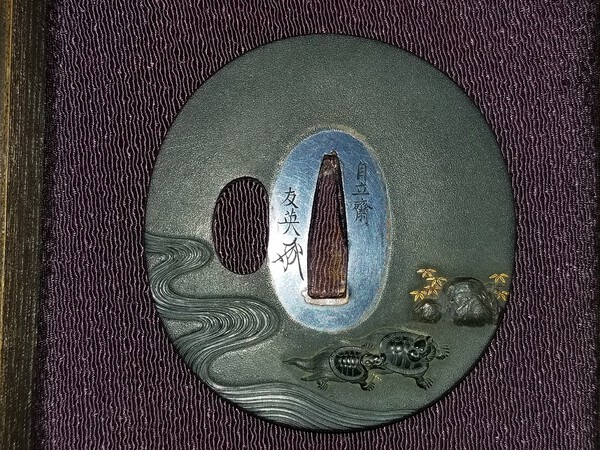 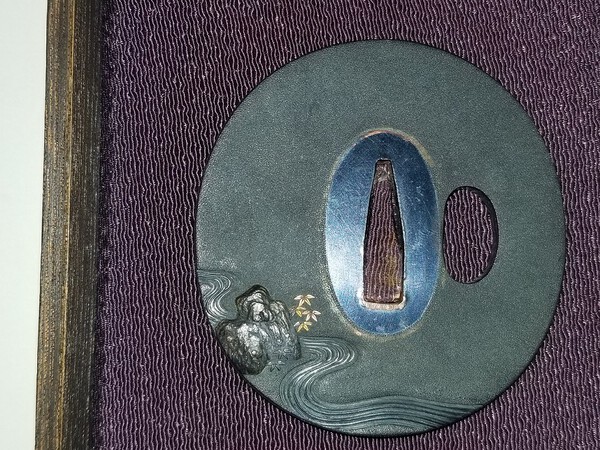 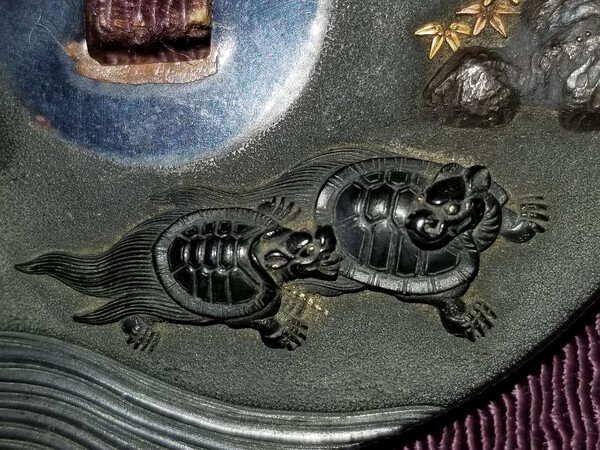 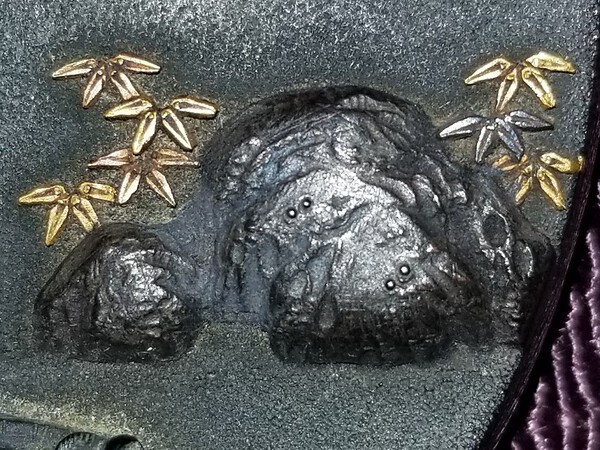 Very nice, quite the tortoise and hare collection you have.

Very nice, quite the tortoise and hare collection you have.

Setting up a race

Beautiful Jeremiah, so much better from YOUR photos.  Since your sending It to Ford for some touch up, best leave it all to him....it will be perfect when he's done with it.

Mmmmmmmm...  I'd take advice on using Renaissance Wax ('ren wax').  Personally I wouldn't - the Japanese didn't have it, right??  But what DID they have?  They had ibota - was that used on fittings??  Then somewhere rattling around in my brain is a kernel of a thought that I've read somewhere in the dim past that the Japanese did use a "vegetable" wax on their fittings.  I have no idea.  Does anyone know??  I think its an important question for tosogu preservation - I have some nice items that I wonder about in terms of both lifting their appearance as well as enhancing their continued preservation.

EDIT:  Mmmmmmmm...  as in "Lovely" rather than questioning the use of wax...  Just to be clear.  Stunning tsuba Jeremiah.

"Ibota-ro is a natural insect wax. The larvae of the wax scale insect (ibota mushi; Ericerus pela) live on the ibota-no-ki bush (a species of privet, Ligustrum ibota), and frequently form an infestation. The larvae protect themselves by producing a fine waxy thread that form little balls on the branches of the ibota privet. Eventually branches are densely covered by the waxy deposits, which are then collected, heated, and cleaned to extract the high melting point wax.

The wax has a wide number of applications. In polishing it prevents friction between the migaki-bo and the blade. It is used in tsukamaki for polishing samekawa prior to doing the wrapping. It is also used for as a final polish for shirasaya, as a traditional finish for Japanese coloured metalwork, and has been used in Japan to coat tsuba in order to inhibit rusting. Ibota-ro is also used to polish furniture, cabinet work, wooden utensils, and to make sliding doors move smoothly and noiselessly." Ryujin site.

For veggies, I recommend Carnauba or Carnuba wax.

Thanks for the tips on ren wax. My preference is to just leave it as is and monitor. None of the tarnish areas seem "active" so maybe fine as is. I will be talking with Ford soon and go from there.

It's correct that Ibota wax was traditionally used on tosogu.

However we now know that this is not wise in the long run.

"..Over time the wax will inevitably degrade due to the presence of atmospheric oxygen, moisture and ultra violet light resulting in a break down of their esters into their component fatty acids.

This break down of the wax is greatly accelerated by the presence of copper.

These organic fatty acids then react with copper or zinc (in brass) ions by a process known as saponification to form a corrosion product called copper or zinc soaps. The copper soaps appear as deep green surface encrustations whereas the zinc soaps are typically white. There is evidence to suggest that this process may in fact be further accelerated on patinated copper."

The Technology of Japanese Art Metalwork - Metals, alloys and patination.

A History and practical manual.

Ford, is Renaissance Wax absent of this effect?

Just throwing in my 2Cents, why not Beeswax? I use it on pretty much everything, wood furniture (mixed with oil) and on metal.

Beeswax will break down to fatty acids also but microcrystalline wax like renaissance wax is apparently stable. It was developed at the British museum so I think it's fairly reliable and trusted in Professional circles.

What time frame are we talking about? months, years, decades?

in laboratory tests this effect can be triggered in a matter of days but as I described there are a number of contributing factors, worst case scenarios are probably not helpful but from my own work as a restorer I would suggest there's no immediate panic required in terms of older pieces rather it would be a matter of improving our 'best practice' moving forward.

Great wax discussion! Interesting. For cars I swear by Collinite 845.

In any case, am in discussion with Ford on getting this spectacular tsuba (IMO) to it's best state.

Thank you Ford, in perfect conditions that is no time at all!
Jeremiah, you have a wonderful Tsuba here and I hope you can share any work that Ford will accept to carry out.

Actually, it's a question I have that the more experienced members maybe can help with.

This tsuba has NBTHK papers and the picture matches the work of course, but shows the blemishes. If I have this restored/cleaned/etc I think as long as I document it, it won't be an issue. Any input?

As long as it is professionally/respectfully restored there shouldn't be an issue.

I  like it Jeremiah.  I have a soft spot for Minogame (not tortoises or turtles folks!), and I really like the ground work on it (ishime).  Cheers, Bob

After the outage here on NMB, a bunch of comments for this thread were lost. As Ford Hallam was kind enough to allow us a look at an episode of his Patreon video collection in regards to this tsuba, here it is again:

The Tomohide is finished cleaning and repair now. When I have it back in hand will do a proper reveal of the restoration. I can assure Ford is a magician, and you should have zero concerns if you want to work with him.

To reprise,  sensitive and beautifully executed work, and the videography is excellent,  can't wait to see what Ford has comming!

Ford has completed the Tomohide work, and the results are exceptional. If you are a subscriber on the Patreon page, there is a new video which documents the final work:

I am hoping to have the tsuba in hand soon, but why not give a tease look at what was done? Full pics to follow later on. Can't wait to have it back. And something else will be coming as well, something in the works for a long time now.

Before and after; I know lighting is different but you can get an idea. Lighting will be same when I have it in hand. A saved piece that was at risk for verdigris damage, I can't be more thankful as I love the tsuba:

“I generally avoid temptation unless I can't resist it.” ...

Looking forward to the finished project

UK package I will pick up tomorrow, so expect a new post comparing the before and after in same lighting setup.