Show Us Your High Class Gunto

Good quality Type 98 with Kanbun era blade. The mounts are still in very good condition, the original company grade tassel was a bit fragile so I replaced it for display. I'd like to see this thread keep going!

With the Tegai in D mounts.    The money is in the Blade.

Wouldn't be too much to have that handle section redone with competent shaping and good quality samegawa.

This is one thread that should be kept alive! Some one mentioned minutia. I really love the finer touches on GUNTO mounts. Attached some photos of TSUBA/SEPPA that are totally original to the outfits, assembled in the correct order, are beautifully detailed, and have only been disturbed a few times in their life. These blades are great too, but it is the original detail that I love.

These were made relatively early in WW2, when I guess they had the time and materials to create good workmanship.

Beautiful swords! One question about your Kai gunto sword. Is the heart shaped figure of the hanger closed or is it just the angle of the picture? I have only seen the open-heart type hangers.

The original post was in 1st August 2017 under heading "Kai gunto ashi".

Thanks for your reply. I find this a very interesting detail. Normally this kind of labor / time reducing things are seen on late war production runs. But this is on a high end, early war piece.

Some GUNTO that are nice. This is why they are being sought after by collectors.

Neil, your collection never ceases to amaze. The first sword in the second picture with the Field Grade tassel, has the Tsukamaki been lacquered or is that from sweat and handling?

The Type3 looks very good Neil. What blade is inside?

Back in 2008 I catalogued a sword collection for auction.  Amongst many things my pocket wasn't deep enough to buy was a lovely shingunto that I ferociously desired.  That's history, but following Neil's exhortation to keep this thread alive I thought the sword deserved a place here.  This is my catalogue description with selected photos below that. 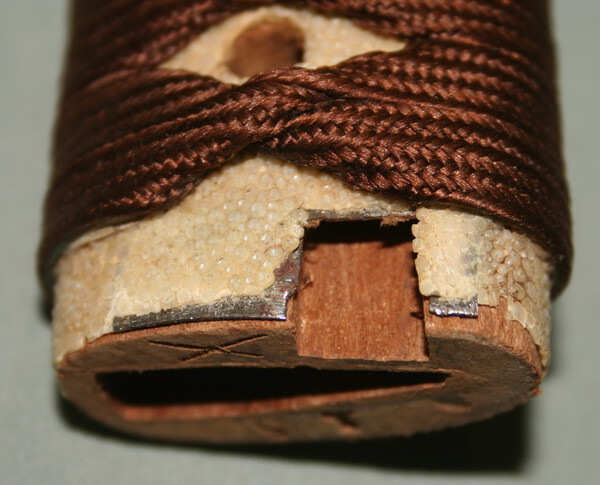 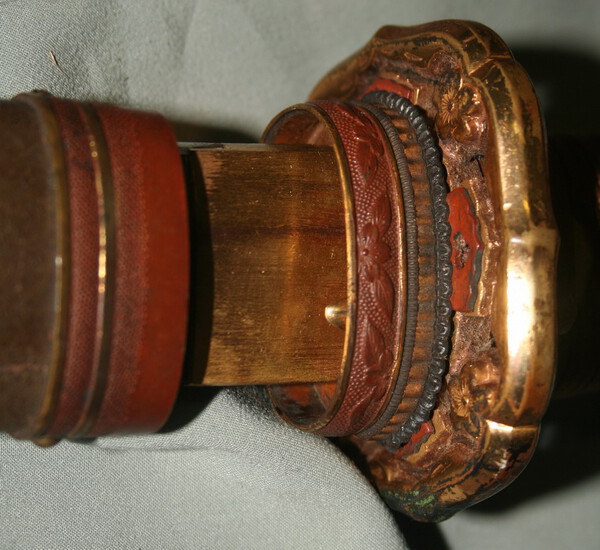 That hamon Bazza! Gorgeous! The koshirae immediately tell you something special is inside and there's no disappointment.

Bazza, FANTASTIC! Hope we see more posts like this.

Not sure if this belongs here since I'm not a gunto collector, but here's something that snuck in many years ago among the koto stuff.  It's been "tarted up" a bit, either during the war or after, I suppose.  The ito has been re-wrapped, the fittings all silver-plated, the saya repainted or re-laquered, and the tsuba replaced with a civilian one.  I was told it once held a Yasukuni-to, long gone.

Thought I might show a few painted/lacquered tsuka, type 0 and 98's.

This thread deserves to keep going, so here is my long overdue contribution.

My tiny wak, thought it was a tanto but it is just too long. In 97 mounts, everything custom fitting. The tsuka is much thinner and shorter than a typical example and the saya is obviously specially made for the 'sword' (dagger with aspirations).

The blade is signed Yoshisuke and the markings on the saya read tori, 'to take'. Thanks to the WR gents for translations.

Question for Neil as the metallurgist -

First of all Steve, like me, your sentiments about keeping this thread "alive and kicking", echo mine. I get a great kick out of seeing other's GUNTO.

Your question on the "silvery" metal, it is more than likely GERMAN SILVER, as mentioned in Dawson's book. German Silver is 60% copper, 20% nickel and 20% zinc. It is easily worked, shiny, can be joined and is cheaper than real silver. It is corrosion resistant so ideal for Navy koshirae.

And of course, nice little wak, and worthy of posting on this thread.

Steve, this is a pearler!!!  A miniature Kaigunto desu ne??  Is there any precedent for a sword of this type??  Is it known what rank or OR might have worn it???

Reminds me of a smaller NCO sword (aka "metal hilter") I once saw that I _JUST_ missed out on buying.  The lucky owner was generous enough to let me photograph it.  I'll have to pull that together sometime for this thread.

I think this is again a case of you could order anything that you could afford at the time. If you brought a blade from home, you could pay to have it put into custom mounts.
Maybe this guy had a regular Kai Gunto and wanted his ancestral tanto in similar ones. We have seen various custom mounts and fittings, so I find examples like this logical if not unusual and basically one offs.

Incredible piece you have there, I had to smile at the double hangars! Truly a miniature Kai Gunto for all intents and purposes.

I think this is again a case of you could order anything that you could afford at the time. If you brought a blade from home, you could pay to have it put into custom mounts.
Maybe this guy had a regular Kai Gunto and wanted his ancestral tanto in similar ones. We have seen various custom mounts and fittings, so I find examples like this logical if not unusual and basically one offs.


Hi Neil, Thank you for your insight. Handy to have a metalergist on hand. I'm pretty sure the habaki is actual silver, but the other fittings are likely as you describe.

Good to hear from you Bazza. I believe Brian has pretty much covered exactly what I'd have said. There was no knot, so I couldn't tell you what sort of officer owned this sword. Since they were private purchase, the only thing I know is that they were wealthy, because everything is top notch. But anyone can be wealthy right?

Shorter swords are often called ‘crew swords’. I find this rather misleading, since there is no evidence that vehicle crews wore shorter swords and we know for a fact wakizashi were used due to shortage in sword supply. Though as Brian stated, regulation seems rather lax so all sorts of personalised swords pop up. So you could speculate it was worn by a vehicle crew, but I really doubt it. Until you see a picture/evidence of a specific sword being used by a vehicle crew, they should just be called a short sword.

Please do find that picture too; I had forgotten about it since you last mentioned, or I'd be nagging you still.

It is interesting that Naval officers in Submarines still had full size Kai Gunto, even with the size constraints of the vessel. I have seen crew refer to tank crew, aeroplane crew and submarine crew. So I think "crew" swords are  post war marketing jargon.

The shorter blades were often worn by non-combat office and administration staff, who, through rank or status were entitled to carry a sword.

Shamsy.
The knots on Kaigunto’s dont tell rank. They where solid brown.

My favorite rare “made on order” navy dirk with a 1600 century blade signed by Kunihiro.
The other dirk is for size compare.

Shamsy.
The knots on Kaigunto’s dont tell rank. They where solid brown.


Of course! Slip of the brain there!