42 replies to this topic

Just how uncommon are large Shin Gunto over 40 inches overall? The largest I have is 41 inches with a 27" suriage Koto blade, I have seen one that was 43 inches (third picture) that I regret not buying. Do any of the collectors here have unusually large swords in their collection? 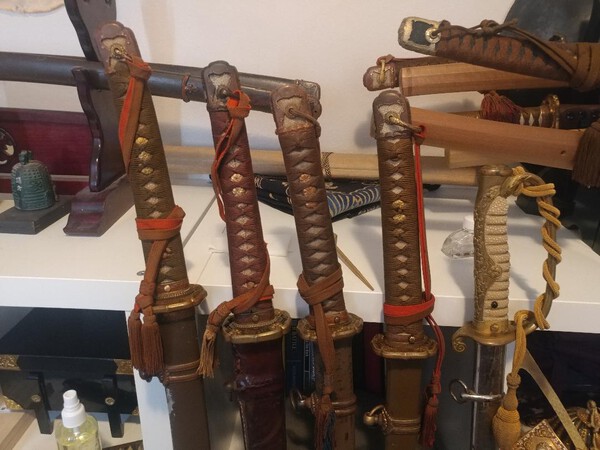 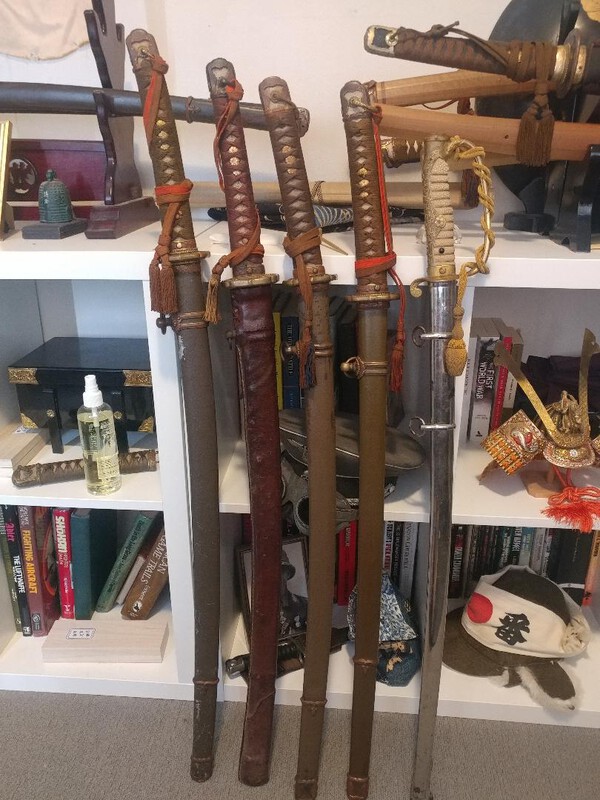 Tbh, I think you’re the first I’ve heard of who is looking at OAL in koshirae vs nagasa.

Wow Brandon that would've been an absolute monster! Considering the average height and build of Japanese officers back then anything over 27" Nagasa is unusual to be comfortably carried. My sword has an aluminium Saya, a normal steel Saya on one of these large blades would be no joke to lug around.

It was a custom made blade by (Iijima) Masayuki, who was the head of one of the NCO factories.

I can't remember where I fond it but there was an IJA General who was abnormally tall and had an extremely large sword custom ordered to fit him, does anyone remember what I'm talking about?

Just came across this picture on one of Ohmura's pages (http://ohmura-study.net/133.html). The officer was on a gunto repair team, and had quite a long gunto! 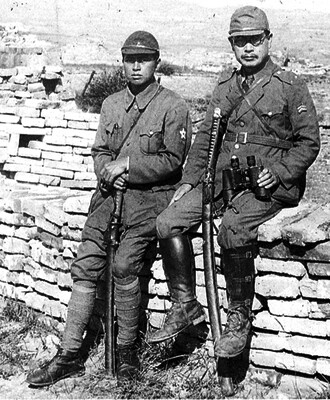 Heck of a sori on that one!

Not sure if this helps, but I can say I have seen long blades in normal length mounts but not in the noticeably over-length mounts you have.

To the best of my knowledge, some very long mounts were made for katana during the Bakumatsu period, and were in fact regarded as a political statement of sorts.

I wonder if this had an influence, as in long gunto being made in imitation of these, either as a homage, or as a reference to the politics of the time when Japan was under threat from the West..

In yojimbo mifune killes one these billy the kid guys.

I have had a kyu gunto dress swords with nagasa over 33 inches.

New addition, 28" Gendaito by Kanekiyo Yoshihiro(thanks George), mounts come in at just over 42 inches. Shortest is a Koa Isshin which I suppose is the typical size of Shin Gunto.

wow...I have been in nihonto since 1970 and have never seen such long bladed gendaito-gunto.

No stamps visible, I believe it's August 1939 dated: 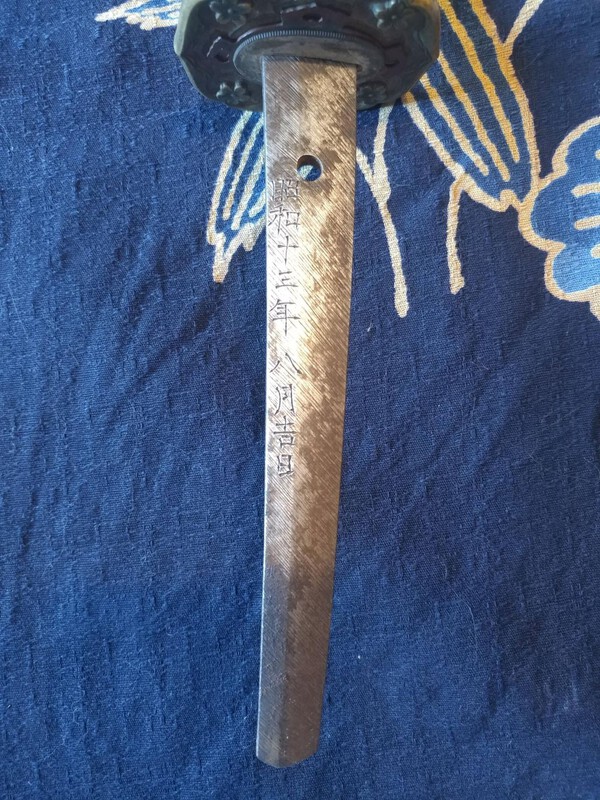 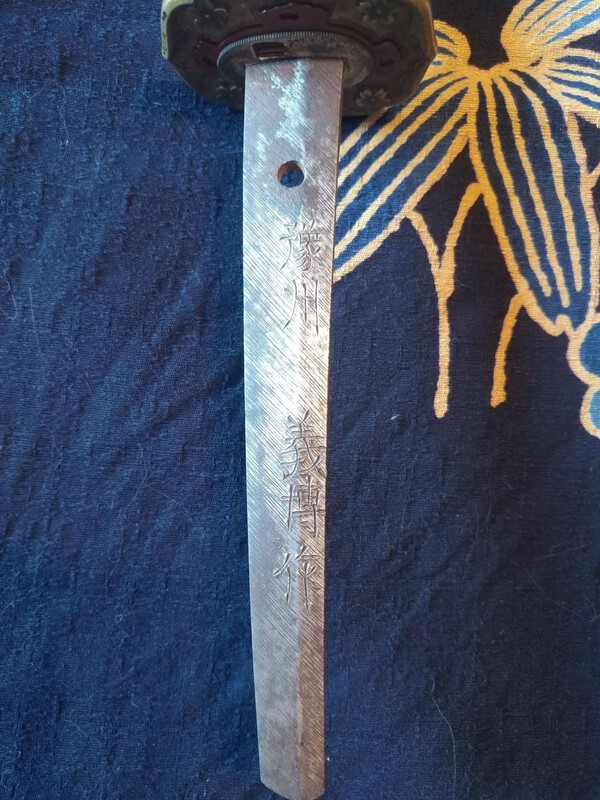 Thanks Bruce, George also informed me it is not signed Kanekiyo but "Yoshihiro".

Blade looks way better than his pics on eBay. Been posted quite a few months. Couldn’t ever find a Yoshihiro. .

Some pictures of the Hada: 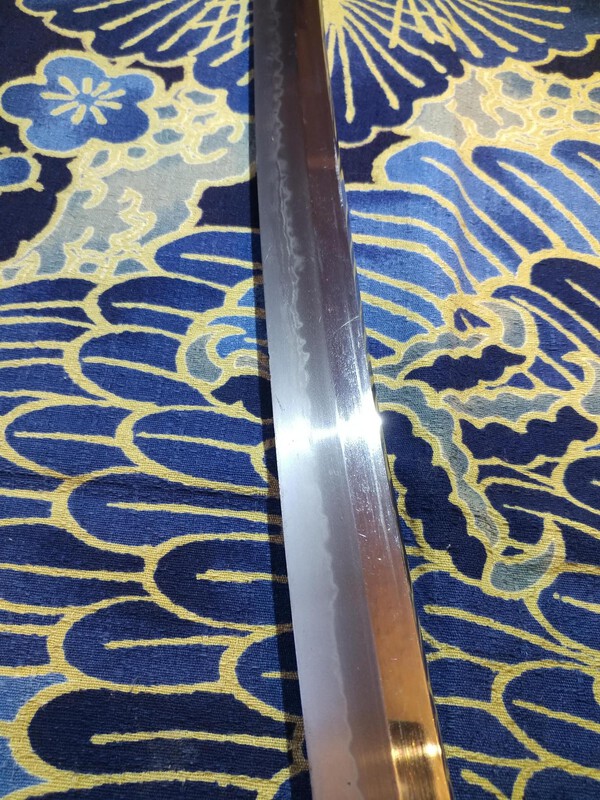 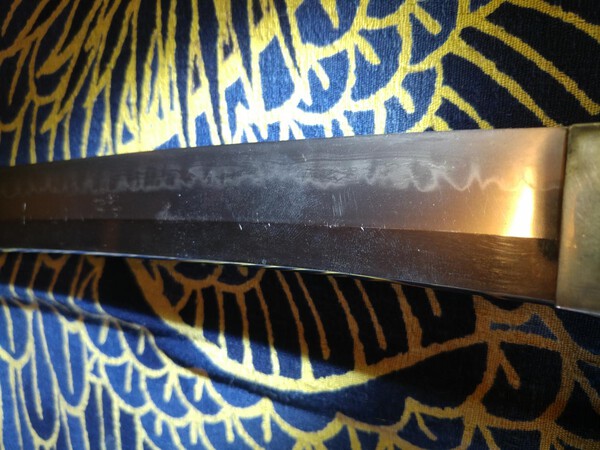 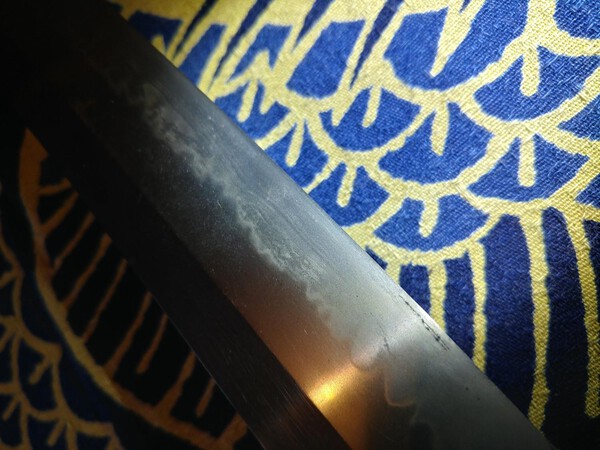 love the hataraki in the second photo

BUT THOSE xxxxING FINGER PRINTS

Don't worry, they are not mine! Unfortunately they are among the staining & rust spots dotting the blade, Uchiko is helping remove old gunk and hopefully those grubby paw prints will fade.

Interesting that despite being 29" Nagasa the overall mounts are still around 41", it seems the Tsuka is rarely dramatically larger than other examples, even in the swords I have there is not much discrepancy between the Tsuka of large & normal Gunto.

I have some high quality blades with fingerprints. No chance without a polish to get them away. These are very very ugly but we must live with it. I hate them too.

Ok I just found a picture of some of my swords mounted on my wall showing size differences. I am not home much but as soon as I can I will add some measurements. Thank you for looking 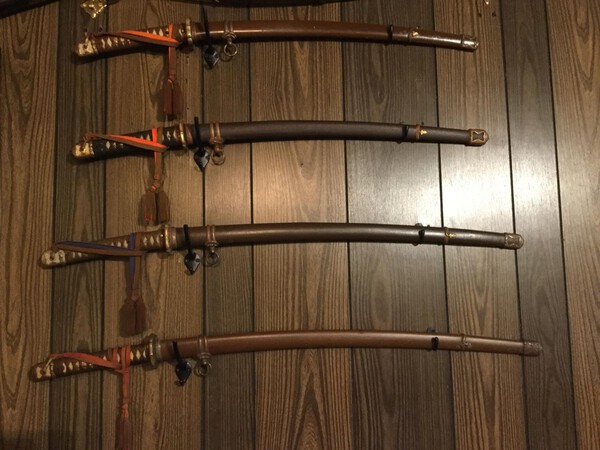 Here are some shots of my large shin gunto. It is just under 41.5 inches overall with a 29 inch nagasa and a steel saya. Looking at my small collection there appears to be an inverse relationship between tsuka length and blade length. My shortest blade has the longest tsuka and vice versa. Looks like there was an effort to keep them all a similar overall length, despite the blade length. This one is missing its sarute. Does anyone have any thoughts as to what type of sarute it would most likely have been?

Almost impossible to say, the only sure bets are when the remains of a silk cord sarute have been left in the barrel. Otherwise for a nicer type 98 like yours one of the ornate cherry blossom or clasped hands Sarute would be suitable.

Thinking about it some more, the fact that the sarute is gone suggests the original was most likely silk cord. I think it is unlikely that a metal sarute would simply fall out or fail.

Thanks John,
Thinking about it some more, the fact that the sarute is gone suggests the original was most likely silk cord. I think it is unlikely that a metal sarute would simply fall out or fail.
Cheers,
Bryce

While that is possible, it doesn't explain them all. NCO Type 95's used almost exclusively metal sarute, yet the majority of them in circulation today show up without them. I've never heard anyone say why they go missing. Another possiblity is that when the Allies forced the Japanese to surrender their gunto, many would "deface" them to some degree - rank tassels were removed (maybe removing the sarute in the process?), family crests scratched off, guys turning in rifles often scratched off (or attempted to) the Imperial chrysanthimum stamp. Just an idea.

My dad's Mantetsu still had the stump of the cloth sarute that was originally there, along with a tiny metal wedge that secured it in the barrel screw. So, it was easy to decide which kind to refit it with. If yours doesn't have any pieces inside, then it's really up to you to decide which kind you like. No right or wrong in that. 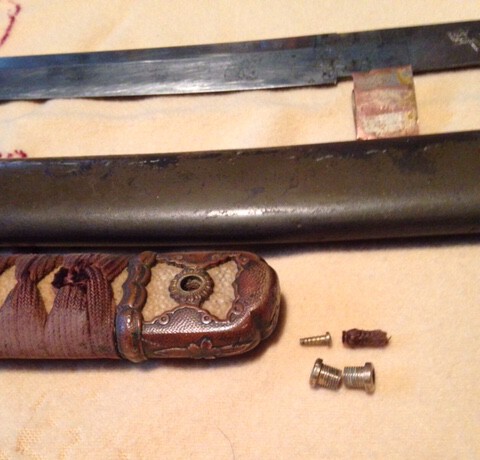 Back to Military Swords of Japan