Anyone Care To Offer Their Opinion....


12 replies to this topic

...on this tsuba mei? It has me stumped.

On the right side the first character looks like it could be the naga character 長, as seen in Choshu. The second, I have no idea, certainly not shu.

Might just be my phone but the mei has a rounded feel to it as in cast.

Nah, it ain't cast.  It is hard to translate though

Evidently nobody else is giving it to go!

I think only Morita san would get that second kanji.

I think the left hand side last character is a kao

Would never have gotten that.
Tomonobu seems a common Choshu name though. Have one myself.

It looks like a very nice tsuba, but I'm partial to Choshu work.  Thanks for the lesson Morita San!

Morita Sama, Thank you very much for your translation assistance. You are "The Man" !!!

Grev, thanks for your attempt, I was aware that was a kao, but should have stated that to avoid confusion.

It was the "Han" and "Nobu" characters which were killing me. I don't know that I would have ever figured out those two. They had me doing the old

I thought the tsuba had a Choshu feel, but couldn't pin point it.

It is a nice little tsuba, unusual in that it depicts a crab with the orchid.  Have seen many with either, but this is the first one I have seen with this pairing. Only downside is it has a little of the patination rubbed off on a few high spots. Nothing major, but still.

And here is my CHOSHU NAKAI iris leaf tsuba for comparison. 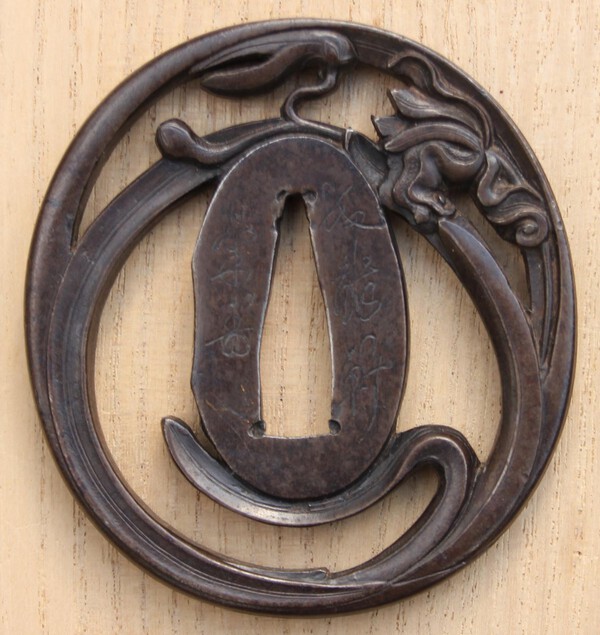 There should be a gold KAO but it has worn off, or been removed.  A remnant can be seen.

Nice and very similar, even signed "chohan" as mine is.  I think yours , like mine depicts ran or orchid opposed to iris.

Nice. My wife had one of these. I've seen the design at least a dozen times, but never one with a design element at the bottom like that crab.

Back to Translation Assistance