18 replies to this topic

As a newbie to the Kyu, I thought it would be nice to have a thread where Kyu collectors could compare notes, ask questions, and show their stuff.

I got one at auction, that I intend to sell, but I was surprised at it's size. My first one is single-handed, but still a D-ring. This second one is a beast! Double-handed in the tsuka and the blade is twice the width of my first one!

I didn't realize there was such variation in sizes. 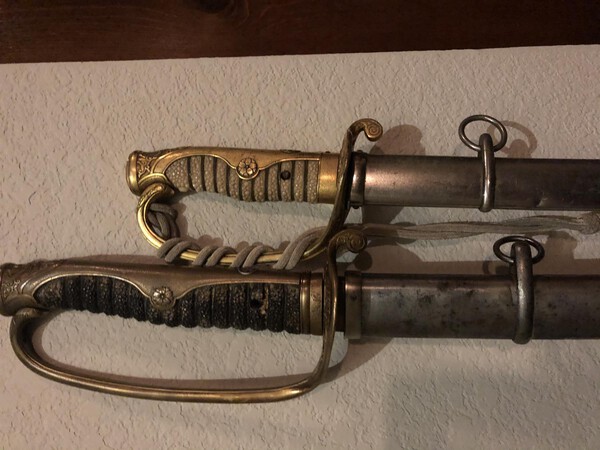 Yes, the actual combat ones can be really huge. Does yours have a old blade?

One more for the list,29.5" blade but single handed. 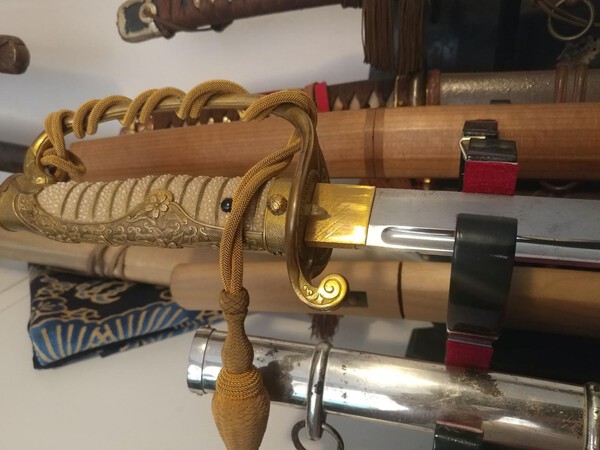 Really top of my want list. Bigin the better with old blade.

My kind of thread! I'll have to share pictures of mine when I can get a chance to get some decent photos.

Yes, the actual combat ones can be really huge. Does yours have a old blade?

John,
I don't think it is. There is orange active rust, but doesn't seem to have any of the dark old stuff, so likely in that 40 yr window when they were making these.

When I get a chance, I'll post my family kyu and machine kyu.

The acid-etched hamons vary quite a bit too. The one on the 19 actully attempted to have some art in it. The shop that made the 19 put more work into all the artwork on the handle. Comparisons below.

I'll post these for sale soon. I'd love to keep one, but since i took that hit on the fake 98, I can't afford to keep them.

If your looking at different lengths in dress swords look here

Wow Hamish! Dawson said there was a great amount of variation in these. Clearly he wasn’t kidding!

Brian, would it be difficult to merge my posts into his thread? It’s much more significant than this one.

Just purchased this type 19 with surrender tag on it. Can’t believe it is still in mint condition after 90+ years.

That’s a very nice piece Alex, congrats. It amazes me too when I see immaculate gunto. There is a chance this was an early 19, as they produced some with the double Ashi, before they went to single ashi, but odds are in favor that this was a Type 8. All of them had the double, and that would make it even older!

No link to the type 8 Bruce.

Also it's the other way around in regards to 2nd ashi. The majority were made with them, and not having a 2nd ashi was the exception to the normal. If they had not been lost prior to that.

The exceptions probably been for the early swords with heavy German influences tunic strap and or when the weather covers were put on.

No link to the type 8 Bruce.
Also it's the other way around in regards to 2nd ashi. The majority were made with them, and not having a 2nd ashi was the exception to the normal. If they had not been lost prior to that.
The exceptions probably been for the early swords with heavy German influences tunic strap and or when the weather covers were put on.


Well shoot. I've told a couple of guys, now, the wrong poop on that! I re-read that section from Dawson, and see that he says that Type 8 lower ashi were not removable, while Type 19 lowere ashi were removable (though "some" weren't removable), and some later 19s (1930s) came with onely 1 ashi. He also stated the main difference in 8s and 19s were in material specs, but didn't say what that means.

How do you distinguish, then, between an 8 and 19?

The single most defining features of type 8s are the backstrap decoration, no sukura blossum on the end of the tsuka,

And with the few iv owned the guards wernt decorated.

The comment about removable ashi was for type 19s, sorry i didnt make that clearer.

Wow, so looks like all 3 on this thread so far are 19s then. Thanks for the tips!

In that there like a practice go before the settled on something they liked.

That's why both exist in low numbers.

If you find one keep it.

Hamfish
Back to Military Swords of Japan