23 replies to this topic

Here is an interesting snake motif tsuba with a difficult to read (very difficult for me!) that I thought would be interesting to discuss. The tsuba, which appears to be brass, is beautifully carved and a rather exciting motif. The owner said he had noted: Ichi Ryu Ken shu jin Kizasmu and  also, Hagiya Katsuhira Seiriken, in his records. He has been away from tosogu for many years, so I'm not sure how accurate any of this is. Comparing this tsuba with a similar tsuba in Dr. T's Toso Soran (which appears to be the work of the Master tsubako), the book example looks more "flowing" in form that the one in hand. While this tsuba appeals to me, it is of the type of kinko I've never had much experience in. Can anyone identify the maker and/or care to comment on it, good or bad?

The quality here is above average.

Wow! Now that is excellent looking to my eyes (drool). The scales are not done as well as could be. I really like this motif though. I really Love the Tsuba and would jump at it if it was around $500. Maybe worth more since it is signed though. Thanks for posting this little gem.

P.S. I'm a novice in the nihonto collecting game so this is pure opinion at best, or total garbage at worst

Here is a couple from the Stibbert collection. One similar to yours and the one from the book?

I hope it helps

These are almost always cast brass pieces and frequently seem to have been originally silver plated.

They do tend to be fairly well finished. The scales are not actually carved but in fact formed by the use of two punches. One creates the outer shape of the individual scale and another is used to stamp the dimple in the centre of the scale. 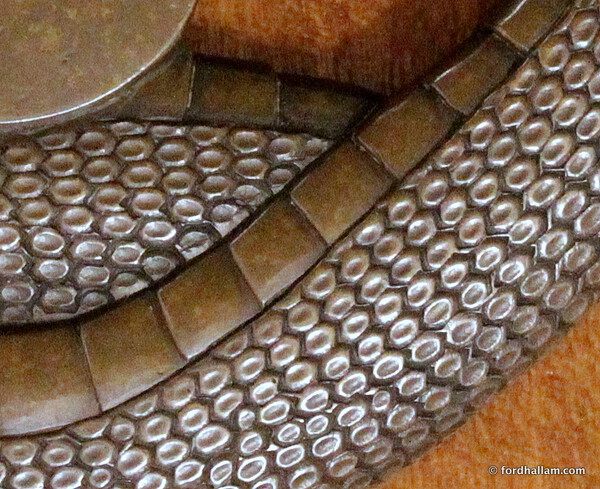 Of the two examples Ian has posted above the one on the right reveals a very clear and bold crystalline structure that is indicative of 'as cast' brass. This means the metal has not been forged in any way as forging breaks down that large structure.

They appear to me to be very late 19th century phenomena with many examples being almost identical, despite the variety of signatures they bear, this suggests to me a single place of manufacture. My personal feeling is these may have been made once foreign visitors were actively buying 'samurai treasures' because I don't think serious Edo period tsuba buyers would have accepted this obvious 'mass production' approach in terms of the processes employed.

Here's another which exhibits that 'as cast' structure on the seppa-dai. 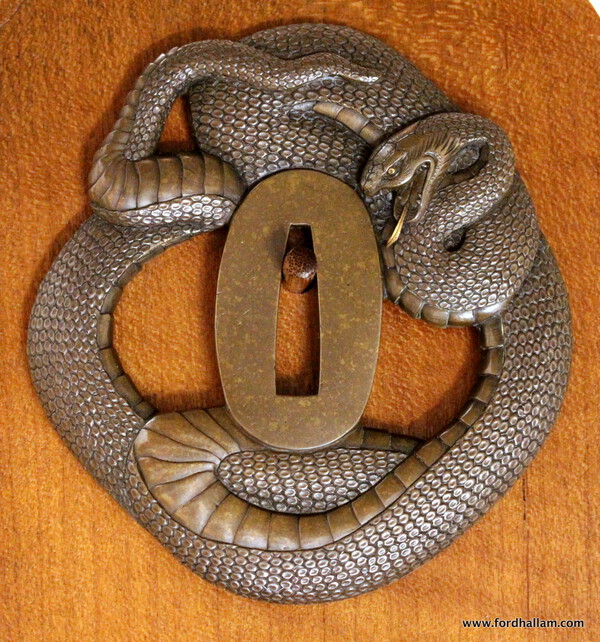 The snake motif, in this bold style was, of course, used by a number of legitimate tsuba-ko in the Edo period but these late cast versions rarely appear to have been mounted and the nakago-ano are often very badly shaped, suggesting to me, again, that they were made for a clientèle unfamiliar with 'real' tsuba.

All very interesting and educational comments, much appreciated. Ford's pointing out the "casting" structures and also how the scales were "punched" is so helpful to recognize. I remember seeing this type of kinko work showing up at sword shows back in the early 1970, often being sold by the Steinmetz brothers. Wonder what ever became of them? While an interesting motif, I'll stick with ko-kinko and good iron for the most part. I'm always amazed to learn how some this work is actually created, such as when Ford explained how radiating lines are cut on the surface of a tsuba. Thanks! Ron STL

Wow! Now that is excellent looking to my eyes (drool). The scales are not done as well as could be. I really like this motif though. I really Love the Tsuba and would jump at it if it was around $500. Maybe worth more since it is signed though. Thanks for posting this little gem.

P.S. I'm a novice in the nihonto collecting game so this is pure opinion at best, or total garbage at worst

Thanks Alan, that's good to know. At this time I do not own this tsuba but expect to fix that sometime next week. I do recall these always being pricey, even back in the 70's. Glad everyone enjoyed the photos and impute by y'all. Ron STL

My snake tsuba and others i've seen say carved by rather than made by. So i think its quite legitimate.

A recent acquisition and another member of the snake tsuba family!

Interesting that the consensus is that these were cast and produced possibly for westerners late edo - though in my initial research I can't find two exactly the same.

The snake heads in particular are all different and the detail in hand is stunning.

Similar quality ones are in collections at the V&A in London and MET in New York.

Nice piece at a good price!

@Uwe - yours is quite similar to mine. I’m going to start documenting all of the variations

Is yours actually that dark colour or is that a B&W scan / photo?

The color is a little bit darker as in the first photo from Ian #4. But the color version is for a catalogue.

But I still wanted to share so you only get the b/w version.

And antoher one on sale on Yahoo....

I remember having seen a similar one in the collection of Janos Horvath in Winterthur, Switzerland. That may have been around 1980.

As Ford pointed out, the manufacture of these pieces has probably always to start from a cast base plate as brass is difficult to forge.

Sorry to revive this thread, but found a really interesting variation of the brass snake tsuba on eBay. First one I’ve ever seen with the snake cooling up a monkey. I’m assuming this is also cast as well?

as Ford explained, the TSUBA body is cast, but many of these TSUBA were finished by hand. In a high quality SHINCHU TSUBA, there is no other way. Of course, some of the items shown above may have been made completely by casting, and received very little work afterwards.

Look on the thooth of the snake. Cast fake tsuba.

It shows signs of modern rubber mold casting (made within the last 30 years or so).  Therefore, the "museum" numbering was almost certainly added to deceive, thereby pointing to a fraudulent, fake, modern copy.

saw two recently on ebay, one with just snake, and another, more interesting, with snake and monkey

Patrice L
Back to Tosogu