soten tsuba x 2- and any criticisms ?

15 replies to this topic

Maybe no one will be looking during this Christmas break but once more can I ask for an opinion on these two pieces plus on Soten made tsuba generally.

I get the impression that they are not(?) always held in high regard but for my interest these are very satisfying for workmanship and condition. I notice that the Compton catalogues have few examples so suppose he wasn't in love with the genre ?

I can handle any brutal comments that might come this way.

Roger, did you forget the second tsuba?

Anyone can be tough for a season,
but it takes a special kind of human to rise to life's challenges for a lifetime.

Thanks Ken. We(my wife who does the pictures and posting of same) did overlook the second tsuba and when we realised this, tried to edit and add the second picture and thought we had pulled it off but obviously not. She is now out riding her horse(5pm here) and won't return for 2 or 3 hours when we will get the second picture off.

Unfortunately my computer competence is somewhat stone age but my wife is fairly o.k if I explain what I want clearly-errors creep in when I don't.

I'm old' just turned 80 but some things do still impress me and that fact did- well done. But I also can see by the erudite comments and the depth of knowledge of your fellow Board members plus sometimes a clue to their backgrounds that many/most, maybe all are very smart blokes.

As intimated, Fred Flintstone is probably more my style so you can see why I am impressed.

Your tsuba is made in the style of soten,
These tsuba were very popular and most  works in the style  are   imitation , often poor quality made by shiiremono makers in late Edo .

Examples - tsuba Soten I / II generation  and two later works in the style.

As said by other members here your tsuba is one of the so called "Hikone Bori" or tsuba made in the style of Soten by many craftsman around Japan. According to the common wisdom the at a certain point in time Soten tsuba were so popular that the Soten school itself subcontracted some of its production to other workshops for the cheapest commission (I do not know if it is true but we have no way to verify). What is certain it that we have a lot of tsuba out there that are signed soten with a wide range craftsmanship quality ranging from cheap rubbish to sublime pieces. This makes the attribution of pieces to the school itself rather difficult. The waters are quite muddy!!!!

Actually I have tried to make some comparison between the pieces in my collection and papered or distinguished pieces coming from reputed publication but with little success. I have compiled a little summary that you can find here: http://www.militaria...-a-soten-tsuba/
I hope it can help.

Ken, I'm not sure if this tsuba got missed or not but here it is, just to be certain.

Plus the excellent responses with illustrations and treatise of this genre.

I am staggered by the intricate work of those examples posted and somewhat embarrassed at my two in such grand company. 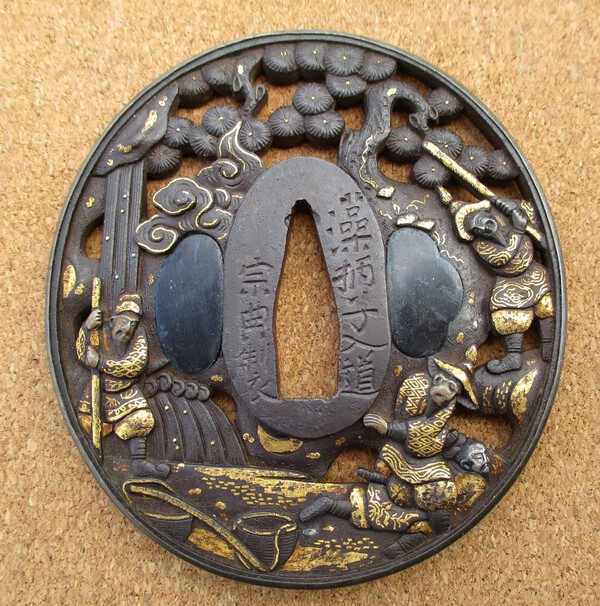 And thanks very much Luca and Mikolaj. Luca's compilation especially.

I suppose the term 'glitzy' sometimes entered my mind when looking at my two examples and some others seen as well in the past.

I’m not a fan of Soten tsuba, too fussy for my taste, but this one turned up in a mixed lot that I bought.  Most Soten tsuba depict samurai battle scenes which are difficult to identify, but I think that this one depicts Kato Kiyomasa (1562-1611) hunting a tiger while on the Korean (Imjin) campaign (1592-1598).  Kiyomasa can be identified as the figure on the right by his trademark high helmet (his famous one was higher) and spear.  Apparently Kiyomasa enjoyed hunting tigers while on the korean campaign (OK, not exactly a recognisable tiger, but it does not look like any Japanese animals either).   The faces of the samurai and tiger on the front of the tsuba are worn, but otherwise in fair condition.  The faces are copper and silver and the details are highlighted in gold nunome.  The reverse is in better condition and shows pine trees and a fire with swirling smoke (presumeably to flush out the tiger), highlighted with gold nunome.   The rim also has traces of gold nunome.  I think that the merit of this tsuba is that I have not seen this design elsewhere.

The tsuba is signed Soheishi Soten sei (made), Soheishi being the founder of the Soten School, moving from Kyoto to Hikone about 1750.  He used several forms to his signatures such as Goshu Hikone ju Soheishi Soten sei and Soheishi Nyudo Soten sei, the Nyudo added after he entered the priesthood.  Soheishi can also be read as ‘Mogarishi’ and the craftman’s name ‘Soten’ was read as ‘Munenori’ before he entered the priesthood.  The samurai designs of the Soten School became very popular and were heavily copied, with members of the school also signing Soten, in various ways.  17 members of the school are listed in Marcus Sesko’s genealogy charts.  I believe that far more fakes than genuine Soten works are in existence and so I treat the signature on this tsuba as very suspect.  I do wonder if Soten gave up making tsuba once his fame was established and he had several workers working for him, concentrating instead on drawing the designs for others to make.

If it makes a buck (or sen or yen) turn it out and flog it!!!  This is in the best traditions of capitalist enterprise!!!

(wearing a shade of pink!!)

Hey John, your tsuba shows Minamoto no Yorimasa killing the Nue.  The Nue was a beast with the head of a monkey, body of a tiger, and a snake for a tail (see the snake's eye on the tail of the beast in the picture of your tsuba below?).  The Emperor was sick and having nightmares every night, and in the early hours of each morning a dark cloud appeared and then disappeared over the palace.  Finally one night, Minamoto no Yorimasa staked out the palace roof and fired an arrow into the cloud killing the Nue and making the Emperor well.  The Nue had been hiding in the cloud and had been making the Emperor ill.

Good eye, George! And thanks for the explanation.

Anyone can be tough for a season,
but it takes a special kind of human to rise to life's challenges for a lifetime.

Been away over the New Year, so I've just seen your reply.  Thanks, you obviously have a very keen eye.  Its not a story that I was familiar with, but you are obviously correct.  I did think that it was a funny looking tiger, but animals not native to Japan, e.g. elephants, are often depicted as very strange looking beasts on tosugu.  It just shows what a useful forum the NMB is, there is always someone out there who can teach us something new.

I appreciate that I'm not the only one getting information from the above posts but I would like to thank everyone never the less.

The 'below the surface' research and enjoyment of the subject is evident.

Here's a comment for Australian members as well. Quite a few years back and over some time I bought a few weapons from a well known London dealer in fine Middle Eastern arms who was always great to deal with and who made the comment that he thought at that time Australia was a bit of a 'cultural backwater'.Possibly he was meaning as a source of indigenous things to source and sell ?He wasn't being rude but just remarking on something he recognized.

Second assumption is that very few Aussie collectors would be willing to pay the sort of prices I imagine a fine Middle eastern arms dealer might want for his arms???  Of course, there are those very keen people who will pay just about any price for something they really want.  I see lots of them on NMB...

To BaZZa regarding values and costs- his prices were rarely if ever cheap but unfortunately for me over the years they never got cheaper.

I can say that his descriptions were immaculate and the items that I got had never been fiddled with or 'improved' that I could recognise.

A top man in his field in my opinion for integrity.