14 replies to this topic

Hey there, I've recently received a wakizashi from my grandfather, which was previously "restored" in to a terrible state of being.

I'm looking to try and restore at least the tsuka and saya myself, but a bunch of parts are simply missing.

The kashira is not present, but the fuchi is, now I'm not sure I'd even be able to find a kashira to match the fuchi, but even so, I'd like to know what kind of design this even is, because while I like how it looks, I just can't figure out what it's supposed to be. 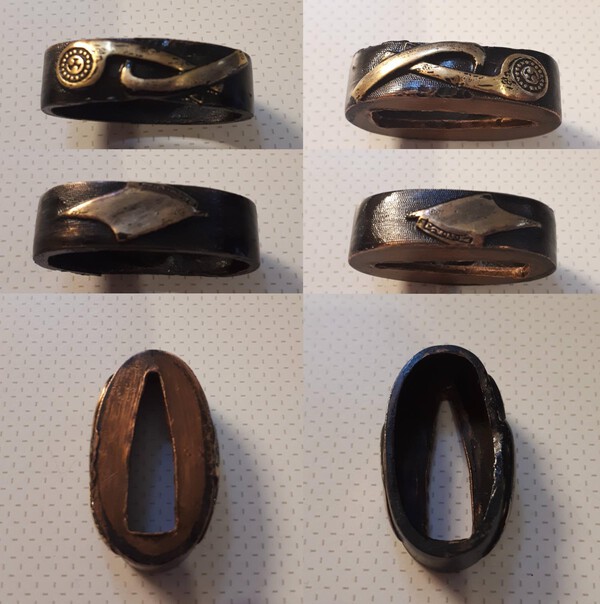 The fuchi is slightly bent on the inside on one side as well, dunno how safe it would be to attempt to bend it back.

It was quite a hassle removing it from the sword, as the guy who "restored" it had superglued all of it together.

A few bonus images while I'm at it, it's where I got so far taking all of it apart:

And what the sword looked like after that guy restored it some 30 odd years ago.

Sorry, but your sword is total destroyed,

I would not call it 'destroyed', but not in good condition. There may be a good thing about these ugly restoration attemps as they possibly prevented more corrosion. A BIZEN SUKESADA blade without written confirmation of authenticity may not warrant an investment of a lot of effort and money, but as it seems to be a family heirloom, it will have some emotional value for you.

Concerning a match for your FUCHI, you may find a nice KASHIRA in the 'orphan KODOGU' section here on NMB (http://www.militaria...hira-orphanage/). I cannot identify the theme of your FUCHI.

I sincerely hope that restoring TSUKA and SAYA yourself will produce better results than the previous attempts!

In my eyes, having an expert look at the blade and then deciding about restoration would be a good first step.

Ah, yeah, I left out some information that I did post about on SBG when talking about the sword.

My grandfather found it buried on a farm in the 70's, and it didn't get "restored" until a good 10-15 years later,

but supposedly the entire thing was rusted and rotted.

The guy who put the sword back together had no idea what he was doing, as you can clearly see from the handle not looking anything like it should, being way too long

for  a wakizashi, and him mounting the fuchi and tsuba in the wrong order ( and the tsuba being backwards too ).

And from what I can tell, I'm almost sure he took a belt sander to the blader to get rid of most of the rust. Underneath the habaki is like 2cm is almost pristine looking

sword, giving me a small taste of what it might've once looked like.

I've looked around for professional polishing options, but I think it would be well over 2000 dollars to get this polished and restored, the blade itself I mean. I seem to be having a hard time finding experts in the Netherlands for this however.

As for the tsuka and saya, I sincerely doubt I could do worse than the previous attempt

Thank you for that link btw, I'll try that!

About the Fuchi:
It's a design of roofing tile.
In Japanese "Kawara" ( 瓦 ).

whatever we venture to do, we have to be conscious about the limits of our knowledge and capacities, and our aims should not be 'better than the worst' but always acceptable on a general basis of that specific field.

whatever we venture to do, we have to be conscious about the limits of our knowledge and capacities, and our aims should not be 'better than the worst' but always acceptable on a general basis of that specific field.

Oh no, of course. I wouldn't be doing this without any research to it, I want to make sure to do it properly.

Thank you! Now I know what to look for.

About the Fuchi:
It's a design of roofing tile.
In Japanese "Kawara" ( 瓦 ).

It may refer to a particular story, but that is beyond me.

There is an outside chance TantoGeorge could tell you more, but I think he is traveling in Japan at present.

Thanks Curran - just got back from a great trip around Japan, and I think that I can add a little to the meaning of this motif.

Ceramic roof tiles (karawa) were introduced to Japan along with Buddhism around the 6th Century, and they are often used symbolically in Japanese art.  A single “discarded” tile is sometimes depicted with an animal - frog, bat, etc. symbolizing the transient nature of human life and nature's eventual conquest over man’s constructs.

A jumble of tiles, like those on your fuchi, are probably intended to symbolize “gakai”, which is roughly translated as “tile release” and means something like the Western metaphor of “the weakest link in the chain” or “one falling domino knocks the others over”.  “Gakai” is made up of the kanji for karawa (roof tile) followed by another kanji that means something like release.  When one of these ceramic roof tiles fails and falls, it often causes the others to come crashing down domino style.  This metaphor can be used as a Samurai/martial arts reminder to be well-rounded and not have any weaknesses.

The specific kawara on your fuchi are called nokikawara (with the round end) and hidarisodekadokawara (curved with design on the edge).

To be honest, the quality of your fuchi is not high enough to justify a lot of work (unless it has great personal meaning to you or your family).  Therefore, many collectors might simply replace it with a better set of fuchigashira.  Alternatively you could use a plain horn kashira (the approach used by many collectors) or try to find an orphan kashira with a matching theme made of similar or complementary metals and colors.

Here's my favorite depiction of the kawara motif - a netsuke by Nishino Shoko of the So school. 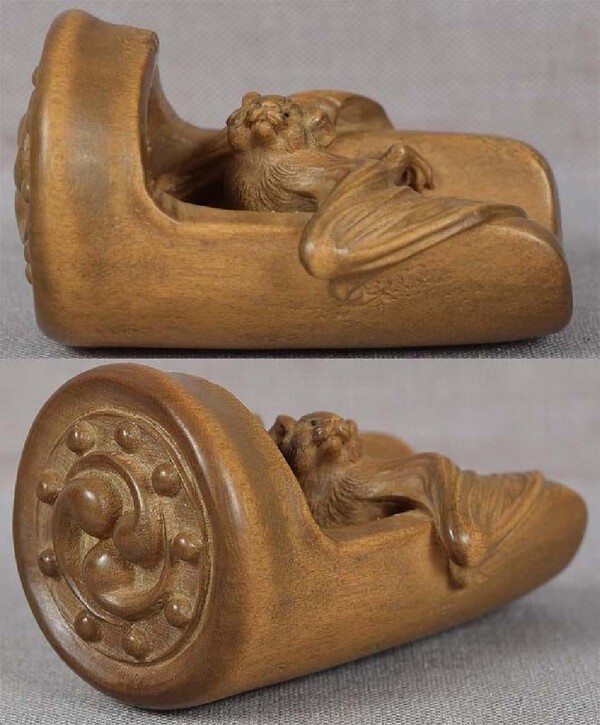 That was an absolute treasure trove of information, thank you very much, George!

This makes it a lot easier to attempt to find something that would match, however using a horn kashira might work just fine as well.

I want to try and keep as many of the original parts ( or at least original to when it was found ) on it as I can, so if I can't find a matching

kashira I'll most likely opt for getting a horn kashira instead.

After hearing that the design was a roof tile earlier, I did try and look if there were menuki with similar designs as well, and in my search

came up two variants of a menuki with a similar tile as in your image, with crows.

Not having a lot of luck finding a matching kashira for the fuchi, but I did come across a fuchi and kashira set with a nice landscape theme that seem to fit with my tsuba, problem is that they're incredibly rusty, to the point where I'm not sure how I'd even get them in a presentable state.

I'm not entirely sure how rough I could be with a fuchi and kashira in my endeavors to remove rust from them, because man is that a lot of rust.

And no, I haven't bought em yet, because they do look incredibly weathered. 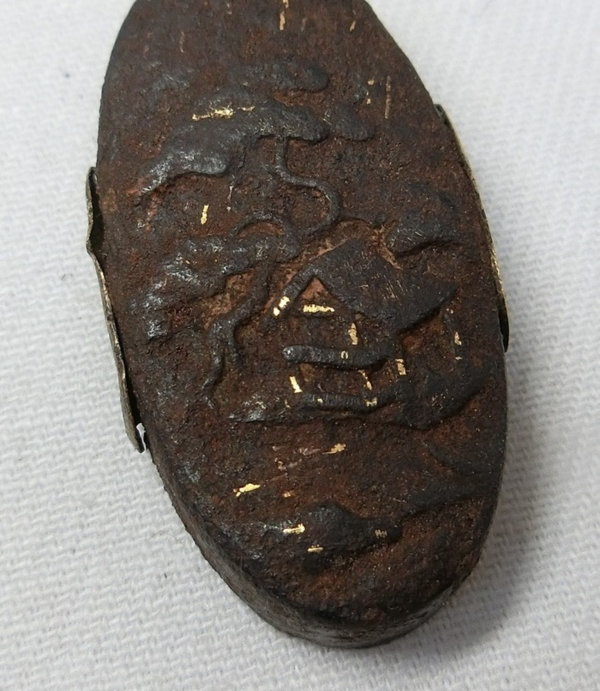 Yes, that seems to be beyond restoration indeed. Don't buy it!

I am loath to make a new thread when it's still about the same sword, so my apologies in advance for necro-ing this thread again.

The habaki I posted earlier ( will post again for clarity ) was what I assume to be a typical two piece habaki, albeit very damaged, as the part towards the edge is missing that I see in all images of these types of habaki, and the second piece that slides over it is missing.

I assumed that the lip at the mune side of the habaki must've been bent at some point, because in all the images I see of two piece habaki, the second part actually fits between that and the nakago.

But no matter how I look at it, i can't seem to see any evidence that it has been bent out of place, as it's not visible on the inside.

Are there different kinds of designs for two piece habaki that just work differently? It does nothing but confuse me.

I'm inclined to think that this habaki survived the ordeal it was in before my grandfather found the sword, as it does fit the nakago like a glove, and whoever "restored" the sword previously didn't get anything else right, which just makes me all the more confused in what was supposed to be on it as the second piece of the habaki.

The piece of the "outer" habaki (missing in your case) that slips underneath that "lip" on the "inner" habaki is usually thin and I see a significant impact mark of the outside of the "lip" of your habaki (on the mune side) that would have bent it in slightly (enough to be tight against the mune of the sword).  When I look at the picture it looks slightly bent in to me...  In any event, you need a new habaki.  It would probably be easier and cheaper to get an entirely new one, but, if you are determined to salvage the original pieces as much as possible, an expert could probably fix the part that you have and construct a new "outer" part.  Just using the inner part alone will probably not allow the sword to fit securely in the saya or create a good seal against humidity.

You've probably seen this picture of one like it, but here's how many of these two part habaki work. 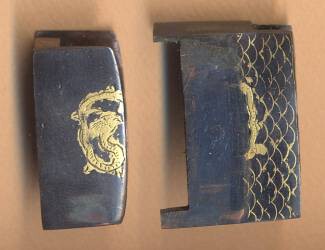 Yeah, I've looked up a bunch of two piece habakis online, and that's how they all appear to be like. It's true that the lip is banged up, when I disassembled it, the guy who worked on it before had forced the fuchi OVER the lip, so I initially assumed it had been bent and crushed flat to the mune.

But looking inside the habaki i can't really see any ridge having been there.

Of course, like this it can't perform its function as a habaki, so I think I'll have little choice than to replace it then.

Thanks for your insight, George.

Well, I just found out why it looked like it didn't have a ridge there spacing it from the blade, it's because there was like a 1mm thick layer of superglue in it, with the same color as the habaki, so it was hard to tell.

Managed to scrape it away to reveal there's indeed a very small space inbetween there, but also that it's also quite damaged, material rolled over. 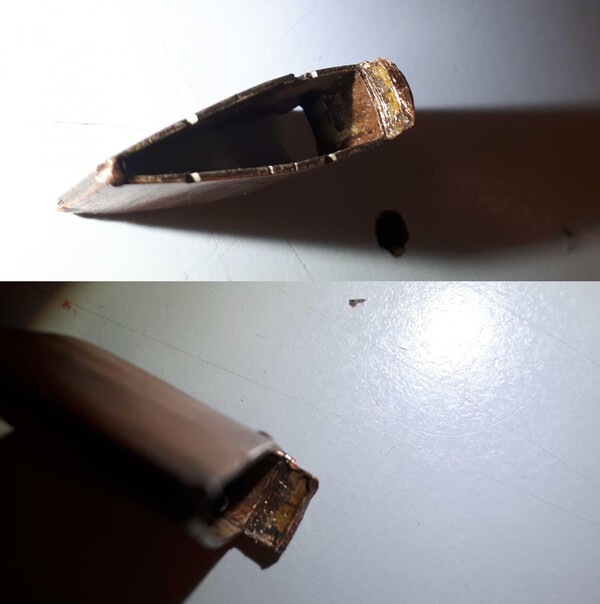 At least this puts me at ease a bit, it was bugging me so much that I couldn't figure out how it was supposed to function if it wasn't like how two piece habakis are supposed to be.

Also tagged with one or more of these keywords: fuchi, wakizashi, restoration