26 replies to this topic

I am not a sword collector but have always considered Japanese smithing as the ultimate. I have owned this sword for a number of years and take very good care of it as it was taken care of before me. Almost looks like it never saw combat since the scabbard is in very good condition. It is signed but I cant read Japanese. I tried to take pictures of it's details, but I guess you have to know the proper way to get good ones. I can always add more if requested. No serial numbers, so I'm hoping it's not drop forged.

what yours wants to be

it might be a frankenstein  as in not all org parts to the setup, saya looks like a new cover, tsuka really long for nakago

lets see what others think, ive been wrong before.

Looks like Stephen got the smith - KuniShige. I don't know smiths, but this looks like an old blade. I don't see why it couldn't have been refitted in the WWII koshirae, though, Steve. Admittedly the saya is immaculate, but I have a couple of Type 95's that must have been carried by an admin clerk or finance Sgt during the war, because they are immaculate too.

Bob, is the saya laquered wood with a leather tip?!?! If so, that would be very peculiar.

Also, I would like to see what an original IJA leather snap looked like to see if this one is a replacement. UPDATE: I just perused Ohmura's examples and it looks like there were as many variations of retention snap/buckle as you might imagine.

No, it is all covered in leather.

Its possible that the koshirae was ordered as such. I'm seen examples that appear to have been katana length for wakizashi.

I've heard from some threads and sources
that it was either by service members of the IJN and IJA taking their family's wakizashi or one that was bought because it was cheaper than buying a katana length one. To ensure that they wouldn't be the brunt of their peers' jokes and to make it appear regulation, they'd have the mounts ordered to appear as regular katana. With my wakizashi at 22 inches, who could tell the difference at a distance? To the average soldier/sailor, they probably appeared to be ko-katana or just one that befits their height.

From thr looks of the koshirae, it looks just fine, maybr the ito was redone or just buggered with? We all definitely know how some mounts like excellent or dang near pristine but the blade scratched up to hell from abuse or good natured attemptd to clean it.


No, I can see it quite well. In fact you should invest in some high quality leather cream as the retainer strap is already cracking. You should try to preserve it!

I agree with Mr "Death-Ace" Hudson and have seen several Waki blades in larger than expected fittings. Heck into the smith for history of the blade, but otherwise you've got quite a beautiful piece there!

Good example, you have done well to keep the leather in such nice condition.

In first pix, is the seppa leather? if so is it hard like brittle ?

BTW your welcome on hinting what the mei is.

Nothing new or odd about a wakizashi blade in gunto mounts, nothing odd about good condition either. Not every officer went out of Japan, the Japanese habit is to store koshirae in a bag. I have one gunto where the only wear on it apart from where the saya was held in the hand, is from the bag!

Blade measures 21 1/2 inches. The saya measures 26 inches.I have added a picture of the fittings. They are all metal, copper brass, etc. I am new to this system and am not sure my picture actually got attached. 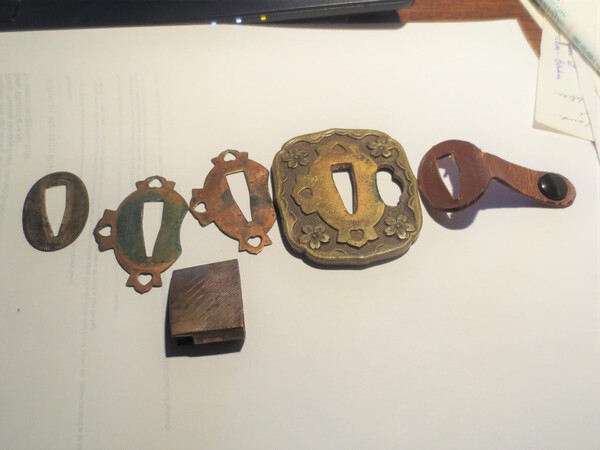 Stephen, thank you for translating the mei. I tried looking up Kunishigi and found a whole range of makers, including a female. I was told by someone as ignorant as me that any signature has a good chance of being fake. Is there an exact translation for the Japanese characters on this sword?

I am relieved to know that it isn't drop forged and perhaps was hand made.

Yea its a big name so bigger the name bigger chance of gimei.

I like the blade, might be worthy of a polish, that my friend = $$$$$, which of you may only get back $$$ if you decide to sell. So it would need to be a labor of love and respect of its history for over 400 years

from one page of them, forgot is there a date on the other side??

The other side is blank.

I think I will forego the labor of love and just maintain the blade in it's current condition. I purchased a maintenance kit which includes the ponce (?), wiping paper and I believe camelia oil, which I use periodically. No fingers on the steel. If I decide to sell in the future, I'll let whomever buys it love it to death.

Again, I apologize for not thanking you and the others who responded enough for your input.

After reading a couple of other posts, I realize that my "ponce" is a uchiko ball and the oil is choi oil. I guess I'm using the correct stuff.

It has been a year since I last posted about this sword. I was a bit confused about all of the information thrown at me. Just the other day I decided to Google Kunishige's signature and found a Wakizasi with the same signature (Yamashiro Daijo Minamoto Kunishige). https://www.aoijapan...moto-kunishige/. This is the same information Stephen sent me. Attached are pics of my sword and the and the one in the Japanese sword shop Aoi-Art.  I thank you all for your help.

there is no similarity, I am afraid.

I am not sure what you mean by no similarity. Please explain.

I think Jean might be suggesting that there is no similarity in what we might call the handwriting, the way the kanji are carved.

I am no expert on mei, so everyone please forgive me for trying! BUT, look at the two bottom kanji. You can see obvious differences on HOW they are written. As I am learning, this most likely means that the two were not the same smith. If it's a famous smith, it often means geimei, or a forged signature to enhance the selling price of the blade. I'm not saying this is geimei, though, I don't know near enough to make that call.

I want to thank you guys again for your help. I did notice a difference in the bottom kangi and I am aware of geimei to enhance a samurai's stature. Since this sword only cost me $150 at an estate sale, I didn't pay extra for the name. Maybe a more exact signature will show up in the future.

I did not mean to hurt your feelings, but sometimes one can really get lucky.

The head slap was you thinking ,,,or so it seemed,, there was only two Kunishige....thers four pages in hawley of Kunishige,  yours could be any one of them...and i dont have a clue about hurting my feelings, i have none!!

As I said in the beginning, I am not a sword collector but appreciate the quality of workmanship. I intend to keep this one. I don't have access to a copy of Hawley, and since there are only four pages, would it be allowable for someone to scan and send copies to me?

Bob Bernard
Back to Military Swords of Japan

Also tagged with one or more of these keywords: katana