Chris nailed it. There's another discussion of these on Warrelics ( http://www.warrelics...ooper-718072/.) Dawson has better pics, but he's quoting Fuller, pages 103-5. Fuller doesn't state how he knew this was on a paratrooper's gunto, but he goes into a moderate amount of detail, so he's clearly had a source for it.

He states that these were "personalizations" and not an official badge. He does state that this particaular one (out of 3 patterns found on gunto) was for an officer.

I originally thought it was a unique custom pattern, but several of them are showing up lately, so there might have been a supplier making them for a whole unit.

On the '44 Mantetsu, thanks for the number, I've added the stamp to my file on it.

No word yet on the "I", but I did discover that the Ren stamps are, so far, appearing on '44 model Mantetsu's (only 1 Ren on a '43). I have several '43's with "Nan" stamps. So the Nan began appearing in '43,and the Ren late '43, but mostly '44. Interesting! Ohmura's discussion of these is confusing, and he admits he is not certain about them, but it is his opinion that these were coming from the Nanman Arsenal (Japanese name for Mukden factory). It's my current theory that Mantetsu was supplying unfinished blades to them, like they were to Tokyo. The dates perfectly match Nick Komiya's revelation about the practice.

It's been a while since I posted the latest version of my Stamps document. Ver 1.8 has a few kakihan added, and the latest "Company" stamp found on a Type 95 drag. As Fuller's chart on hotstamps and kakihan are hand drawn, I thought I'd start collecting actual examples. I've got 6 already, but could use real examples of:

A little help on this one?

Thought I'd correct our discussion on this one. While it seemed it might be a "saka" stamp, I'm pretty sure now that it's the "Se", second inspection mark of the Kokura Arsenal

I don't recall seeing these stamps on this thread yet (if it is, please let me know and I'll delete this!)
From Alex, as seen for sale via the web, a contractor and inspector stamp on a Kokura Arsenal Type 95 gunto. As far as I can find, the contractor stamp is legit, but classed "Unknown". Any ideas on the inspector stamp? My guess is the "Ho" of Kokura 1st.


Sorry, but I have to ammend this, and it's too late to just edit the post:

Thanks to Guy over on Warrelics, the inspector stamp is simply a poorly struck "To", with the lower "legs" struck heavily, and the top half too lightly.

A first for me - an Incheon Army Arsenal "Jin" stamp on a Tokyo Arsenal Type 95!

Includes several hotstamps, the beginnings of a Kakihan collection, a few examples of Buddhist Bonji, and the 4-stamped 95 fuchi above.

In collecting the hotstamps, I've discoverd two blades by Kanemitsu, one with a Kaneuji registered trademark and one with kanji that says "Okada" (don't know if that is a personal name or a location). But a new mystery - why would a smith use hotstamps that aren't his own? I thought the whole idea of the hotstamp was to be a personal mark identifying his own work?

Sorry for the constant updates, but I've re-arranged the doc a bit to make it flow in a more logical order. Also realized I had no actual pics of basic stamps like Sho, Seki, Gifu, Star; now added.

Doing a great job there Bruce!

Hey Bruce , I pulled apart a 1938 '98, and found a stamp on the pierced tsuba. It is the Suya "harp" stamp. I guess this koshirae/sword came from the Suya Sword Shop?

I have never seen that before . It is a Yasukuni Shtine blade, so maybe you may know if this shop fitted out Yasukuni swords?

You tend to see the Suya stamp on many high quality Koshirae & swords, don't have the exact links but I recall seeing it on few Yasukuni and Type 94 swords over the years.

Here's one on a "Zohei-To" in early mounts typical of these swords: https://www.ebay.com...wYAAOSwBgVa9FjJ 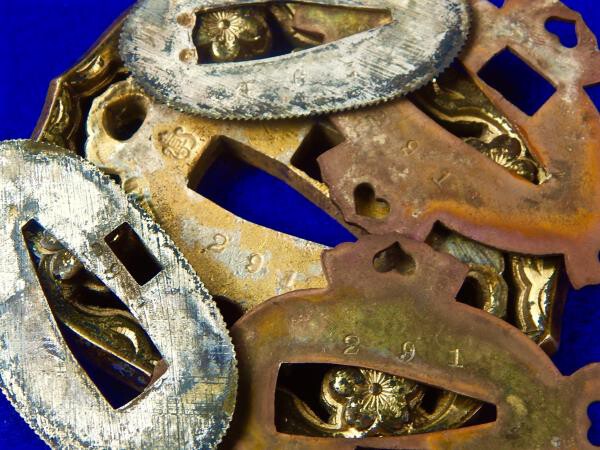 Neil,
I, too, have seen their mark on numerous seppa and tsuba, but had never paid close attention to the blades they were on. Nick Komiya has a dedicated thread to them here: http://www.warrelics...-shoten-711132/
They were making blades, fittings, banners, uniform items and more. So it wouldn't surprise me to learn that people went to them for a quality custom order.


"In this way, the era between the Sino-Japanese War and the Russo-Japanese War, was the heyday for Suya. They had two factories in Tokyo, one in Atago Shita Machi (芝区愛宕下町) and another in Shinsenza, both in Shiba Ward. They had a workforce of 38 floor supervisors and more than 200 artisans, including smiths, polishers, scabbard makers, metal casters, guilders, engravers, leather workers, lacquerers, saddlers, bullion embroiderers, weavers and other specialists. Saber production in Japan was being carried out almost exclusively by artisans in the employ of Suya or by its former employees."

Something new coming to us from Neil (IJASWORDS): 3 stamps on the nakago mune of a Star-stamped Kanetoshi. The top, circled one is "Seki", but I can't find the other 2 anywhere.

In regards to the second kanji character 特, this is another one of those obscure Imperial Japanese Army inspection marks.  It can be used by any factory.  This inspection mark indicates special approval.

George, I had mixed a memory on that Osaka question - According to Ohmura's discussion, on the Type 95 stamps page, there was an "Ogura Army Arsenal" that was renamed "Tokyo".

Kokura Arsenal 小倉工廠 was established in 1933 and in 1940 was renamed Kokura Army Arsenal 小倉陸軍造兵廠.  Ogura is a common mistranslation of Kokura 小倉.  This mistranslation dates back to World War 2 and continues to this day via "Google Translate".

Thank you Thomas! I've added them to the Stamps Document. Can you help me understand the document you've posted? Is it something from WWII records? What is it saying?

The phamplet is a 1998 reprint of the below 1943 War Ministry document that I acquired from Japan.  More or less, it is just a pamphlet that illustrates the markings.  It does not go into the details.  For the record, there are earlier versions of this document but this is the only one that I have seen.

I like your website and the way it is laid out.  I wish more websites were as convenient to navigate.


Rich,
Yes, quite a help! It is part of the Stamps document, thank you!

The phamplet is a 1998 reprint of the below 1943 War Ministry document that I acquired from Japan.  More or less, it is just a pamphlet that illustrates the markings.  It does not go into the details.  For the record, there are earlier versions of this document but this is the only one that I have seen.


Thomas, that's fantastic! Before you joined us, Nick Komiya, over on Warrelics.com, was our only researcher that could dig into the old war records and give us insight from them.

Thomas,
I don't doubt what you are saying, as you are uncovering an amazing amount of previously unknown info, critical info, to our collecting world; BUT it would be helpful to us all if you could expound, or provide some of the evidence of Kokura's 1st arsenal producing blades. We have been hearing from some pretty knowledgable people, for years, that Kokura was administrative oversight and didn't produce gunto. It would help to see some of the evidence you are reading (with English edits, like Nick Komiya does).

As a counter idea, though, I have always taken examples like you provided above, to mean that someone else made a blade, like Nagoya, and it's final inspection came by Kokura inspectors. For the first several years, Nagoya and Seki production was under Kokura supervision. It was somewhere around 1942ish that Kokura's role was decommissioned and Nagoya and Tokyo 1st took over.

That's a new one on me, Trystan! Katakana "Ka".

Thomas - do you have this one on your document?

Do you have the smith name on that blade? I have in my files another kai with the identical styled Toyokawa stamp and it, too, has a kanji stamped below the arsenal stamp. It is the first kanji of the smith that made it. Could this be what we are seeing on yours?

Back to Military Swords of Japan