5 replies to this topic

So i saw this one and loved the whimsy. It reminds me a little of a drawing by Breugel. Anyway, i was curious so i researched the story behind this one.

The story seems to go that Kinko (Qin Gao) was a Daoist sage (Sennin) who spent the first 200 years of his life painting fish. He had such respect for them that he would never harm or eat them. The Dragon lord of the river kingdom sent a giant fish to invite him to come and be his guest, so Kinko told his students he would return and rode the fish under the water into the river kingdom. He was a guest there for around a month and, upon returning meets the god(dess) Kannon, who gives him a scroll that teaches the Buddhist way of protecting all life.

Anyone have any examples from this legend? I've only seen this one and it (and my wallet) is decidedly low-end. 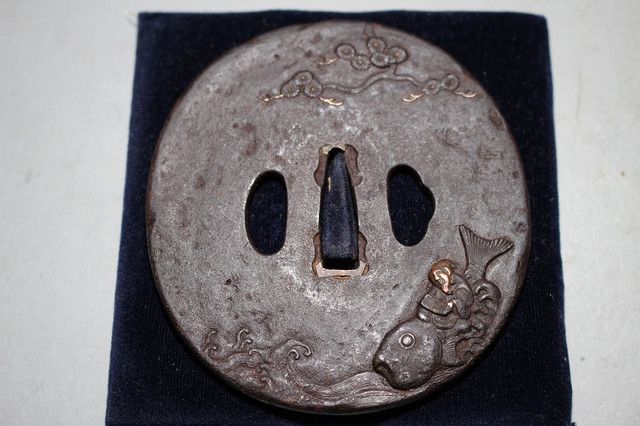 Always liked this one from the Boston MFA: 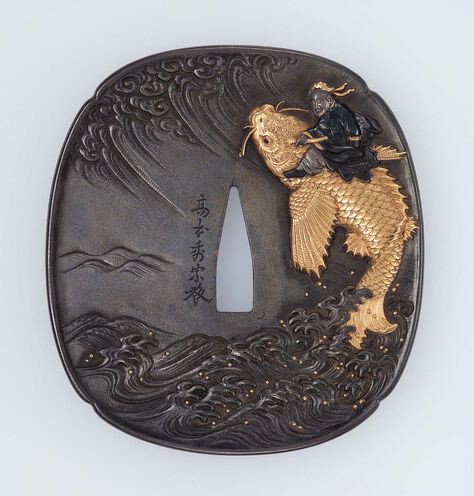 You can google "Sennin Shiei" (Tzu Ying in China) - Found this one:

Iron tsuba with Shiei motif  - Dimensions: 83.4 x 75.5 x 3.9 mm - Iron tsuba of mokko-form carved and coloured with silver and gold iroe, depicting a sennin (immortal) Shiei riding a carp to heaven. Waves in the bottom and clouds on top of the plate. Sennin's head inlaid with shakudo.

Dear Bruno, nice print!  I think that we both posted images of "Shiei" or "Shiyei" Sennin who is actually a different Sennin than the Kinko Sennin that Russ posted...

"The sennin Shiei (Chin. Tzū Ying) once caught a beautiful red carp. He set it free in his pond so as to be able to admire it at his leisure. He fed it well and it grew enormously. After a year its length was over 10 feet and it had grown horns and wings. One day Shiei knelt down and paid homage to his carp. It promised to take him to heaven. It started to rain, a typical association with the nature of dragons and Shiei sat himself astride his fish that carried him to heaven.

The sennin Kinkō (Chin. Ch'in Kao, 12th cent.) spent a great part of his life drawing fishes and singing sacred songs. One day as he took a bath in the river, the king of the fishes invited him to his domain. Kinkō accepted the invitation. He told his pupils of his intention, naming a day for his return. Then he dived into the stream. On the day mentioned by Kinkō his pupils assembled on the bank. Astride a giant carp Kinkō emerged from the waves. After this he stayed yet a While with his pupils who took a vow never again to kill fish. Then Kinkō, and now for ever, disappeared into the stream."

Quoted from: The Animal in Far Eastern Art: And Especially in the Art of the Japanese Netzsuke, with References to Chinese Origins, Traditions, Legends, and Art by T. Volker, pp. 24-25.

"Dear Bruno, nice print!  I think that we both posted images of "Shiei" or "Shiyei" Sennin who is actually a different Sennin than the Kinko Sennin that Russ posted...

George, That one is gorgeous

Thanks Bruno for the Shieh and for the additions to the story.