87 replies to this topic

Here is a quick preview of a fine copper tsuba that I am currently researching and will put up on my Tsuba Otaku website (www.tsubaotaku.com) homepage August 1st. It measures 8.0 cm wide by 8.0 cm high. It is 5.0 mm at the seppa-dai and thinner at 3.0 mm towards the rim. I will be sending photos of it to Bob Haynes tomorrow to get this feedback. The design is that of dragon and phoenix which commonly represent opposing forces a concept of dualism in ancient Chinese philosophy (yin and yang) importanted later into Japan. Everyone's polite comments and discussion are always welcome. Thank you.

The seppa dai shape strongly suggests a post 1876 manufacture. What I mean is whoever made this was not at all familiar with functional tsuba or the classical assembly of tosogu in a koshirae.

It is decorative art and looks nice as it is.  These type of things were popular during the Meiji Period when the artists couldn't make a living making functional tsuba for koshirae. Mauro the Chinese influence is clear but I think it a bit to late to be the work of the many fine Hizen Province during the Edo Period.

Well, gee, Ford, please give us a hint of what tells you that these seppa-dai are not functional. They look like seppa to me.

This article is not a start to finish traditionally made piece, it is akin to the seemingly endless late serpent tsuba.    Certainty, late serpent tsuba exist that are traditionally made, but most are not.  This piece is a not.  As far as Ford's seppa comment....everyone would be better served by looking and seeing, than they would be by asking.  This is a decorative confection and not a tsuba.....or Art.

was 10 years or so at the Louisville gun show guy had a stack of these 15 or so that are reproductions stamped like a coin he sold them as stamped I think at 20.00 each

These type of things were popular during the Meiji Period

I say it is more 昭和時代 to be honest:

Kidding aside, the carving is well done (wish I could do that) but it seems a modern execution and not that old.  The workings of the angry lizard in particular is flat and lacks any kind of artistic energy that would be expected from bona fide tsuba, or any other genuine Japanese art.  To me it looks cast / cookie cutter pressed...

Mauro the Chinese influence is clear

Also, I am not sure if two mythological animals associated with China alone assures that the item has Chinese influence.  It's as much Chinese influenced, as Matsuya curry-and-rice is Indian influenced.  For the uninitiated it seems right, but there is a lot more to it than that.

Interesting. I wasn't aware of stamped manufacture in this domain. With the malleability of copper under pressure, it makes a lot of economic sense and must have been a very cost-effective manufacturing process.

Not cast at all or a reproduction. Many of your guys grasping at straws. Thanks anyway but closing down and need to get back to work.

Here is one polite comment.
It's a cast repro and a "blank" for this "joint work of Goto Ichijo and Tanaka Kiyotoshi"

It's not a straw, it's a log, I'm very sorry.
Check this post on FB, we update it with Ian from time to time and of course everyone is welcome to add their "mistakes" 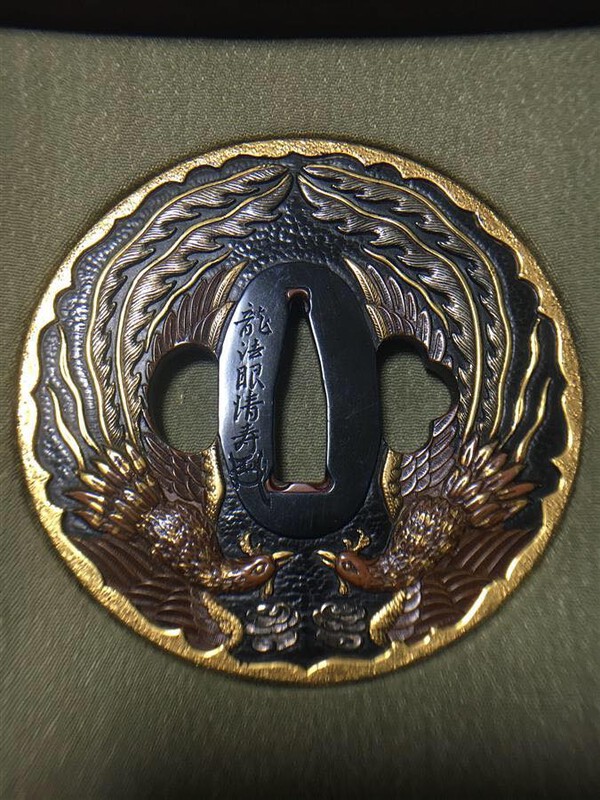 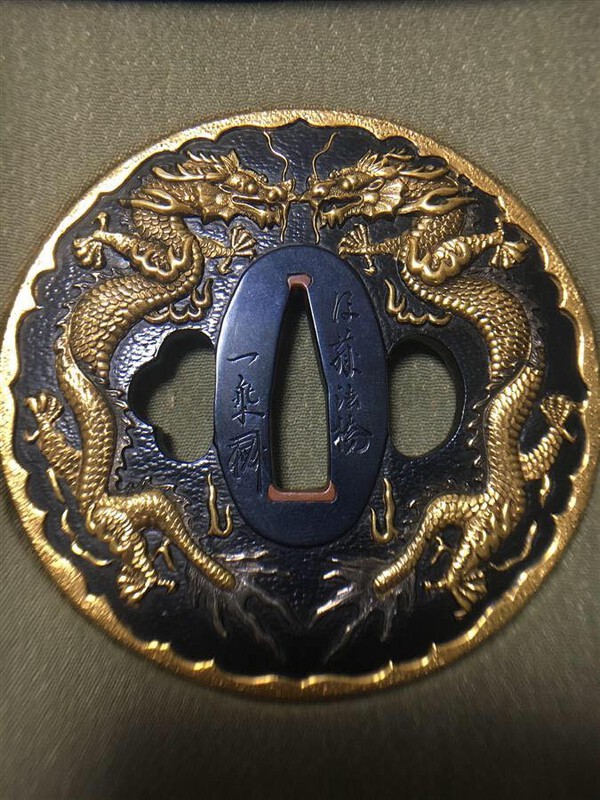 TBH, prefer David's to that genuine one. Talk about kitch

It happens. It is still an attractive piece of Japanese metalwork. Would maybe have fooled me.

David wrote “Many of your guys grasping at straws”.

All I am doing is offering observations from years of studying a broad spectrum of Japanese and Chinese art. The item in question is not my possession. Therefore, I have no horse in this race, so, dare I say that it could be you that is grasping at straws...

TBH, prefer David's to that genuine one. Talk about kitch

We can call both "genuine" in some sense I think, but no antique piece here for sure

Sorry to ask this, im having a dense day and Im having trouble following, but the general thought is engraved (not cast), and new/recent (not antique) ??

Cast/new - just compare the pix, identical in every detail except coloring and sekigane/tagane-ato.

both shapes identical, makes me think of one I saw on yahoo and exactly same as one someone shared here some months ago.
high detail cast, would require larger pictures of the second one to get better idea.

Perhaps you have another Faux Tsuba here.
Alan

For the record, here is the link to the page selling the second tsuba (at 96000 JPY).

Well that explains why the alleged 'real' piece is so unsatisfying, I made the mistake of assuming it was genuine....we all know what they say about that.  On close inspection it is a fake also, the evidence is everywhere.  The genuine piece would be extremely expensive, and desirable, there would be no reason to sell it under the circumstances we find here.  Apparently, more of both versions should be popping up in the future.

is it me or does the original subject poster seem to aquire questionable tsuba then post them for comment. then  ignore all advice, points and argue till he's blue in the face.

i tend to take note of people more experienced then myself, even if i don't necessarily agree with them.

As I said, cast/new.
The pix I posted were from a listing on yahoo, tsuba went for ¥100k+. I believe we found the source

The "true source" is not known, and it is unlikely that it will be, makes one wonder who owns and/or had access to the original....I suspect the answer would be unsettling.

keep up the good work ferretting out the tricky fake stuff guys!  Y'all good people just saved David the hassle of researching the piece (not Tsuba), and possibly have done a great service to his business, in the long run of course.

I hope that in time he will realize that everyone is here to help.   None of us takes pleasure in delivering negative news, but it is something that must be done when necessary.   We could of course refrain from comment altogether, but that does a disservice to us all.

is it me or does the original subject poster seem to aquire questionable tsuba then post them for comment. then  ignore all advice, points and argue till he's blue in the face.

i tend to take note of people more experienced then myself, even if i don't necessarily agree with them.

I agree.   If polite comments are asked for, expect to receive them and reciprocate the same courtesy, is what I say.

Assuming that the black and gold tsuba is more authentic than the copper coloured one, a comparative study is quite revealing.  I can see the difference right away. 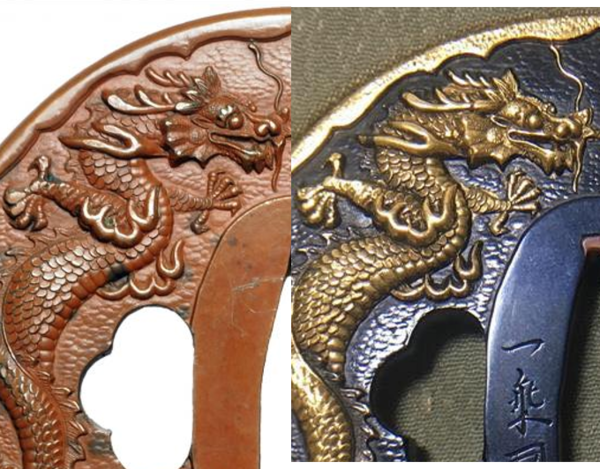 Can you? It seems to me that the scales of the dragon are exactly the same (position, shape, orientation) in both items, only differing by the color (and by the reflections of the light).

They look exactly the same, even counting some of the scales they all equal the same. Quite interesting.

The only difference is essentially related to coloring and signature, what confuses perception is the textured rim and ocassional slip up on the gilding, otherwise they are virtual twins.