40 replies to this topic

Here is my very first Japanese sword : a gunto made by Toshimasa (a Seki swordsmith) in 1940. I bought it from another NMB member, so the sword, although never shown in its entirety, has already been documented to some extent on here. 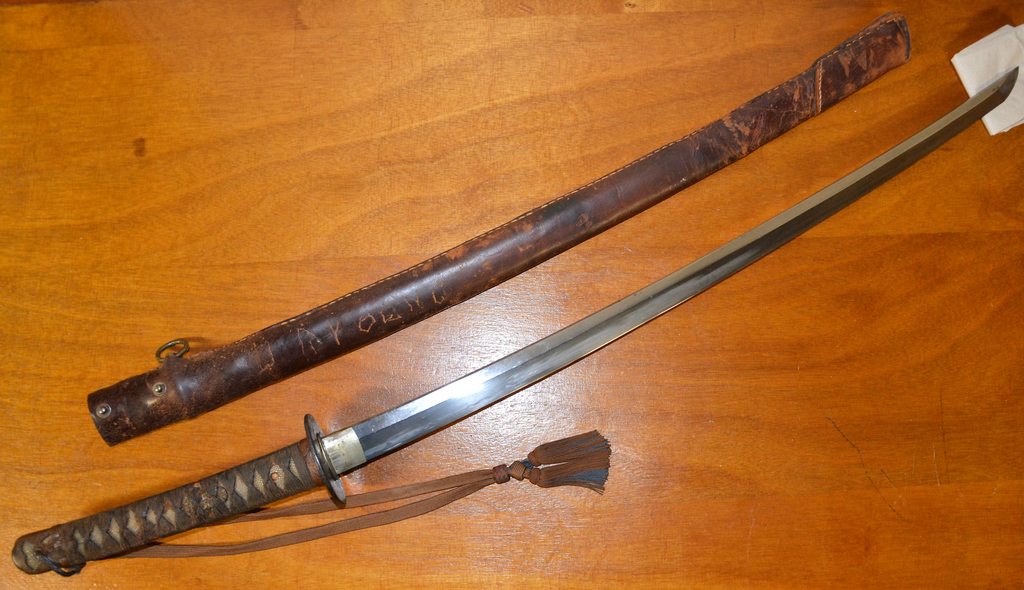 The company grade tassel is a personal addition to the sword, as it came with an NCO leather tassel (most likely a Chinese copy) when I received it. 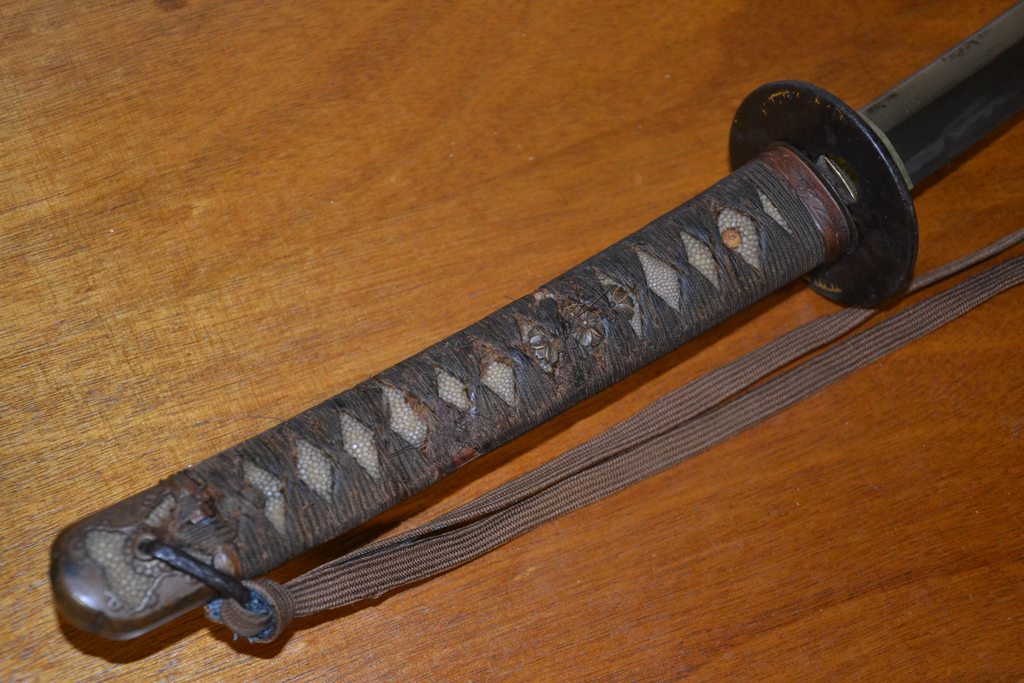 The tsuka-ito shows signs of intensive use and wear and is partly frayed. 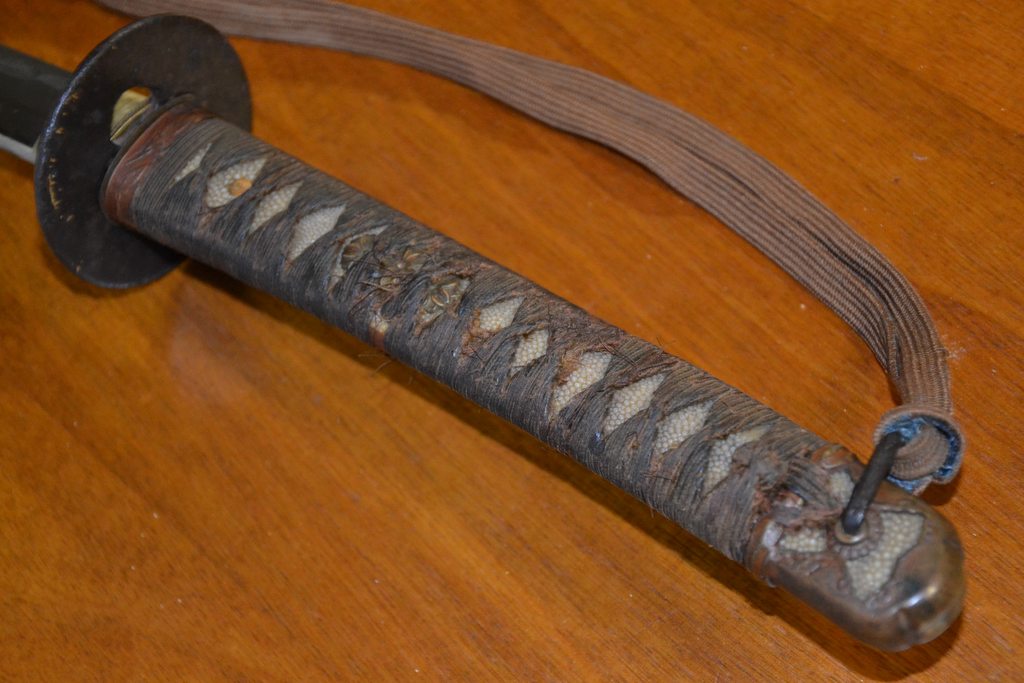 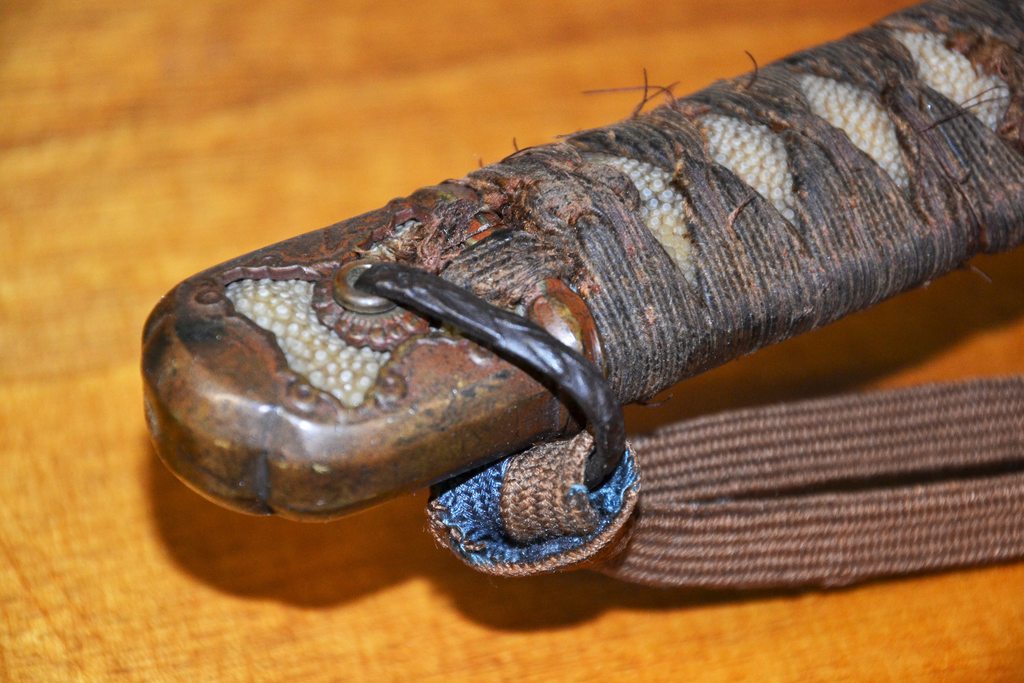 The kabuto-gane is deprived of the usual cherry blossoms and leaves decoration - a cheaper model? 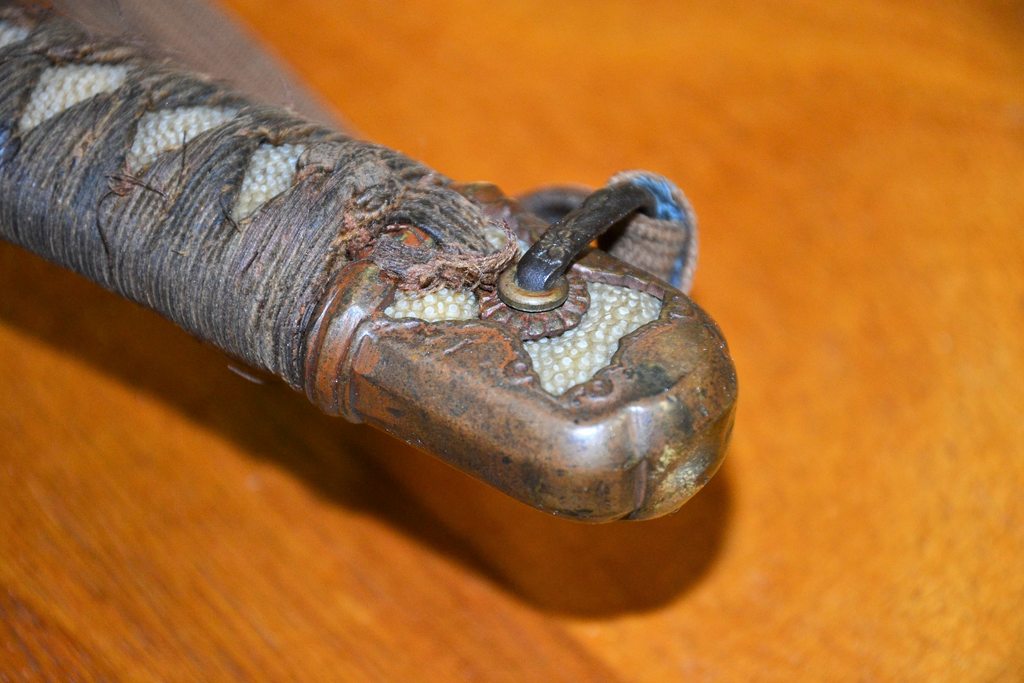 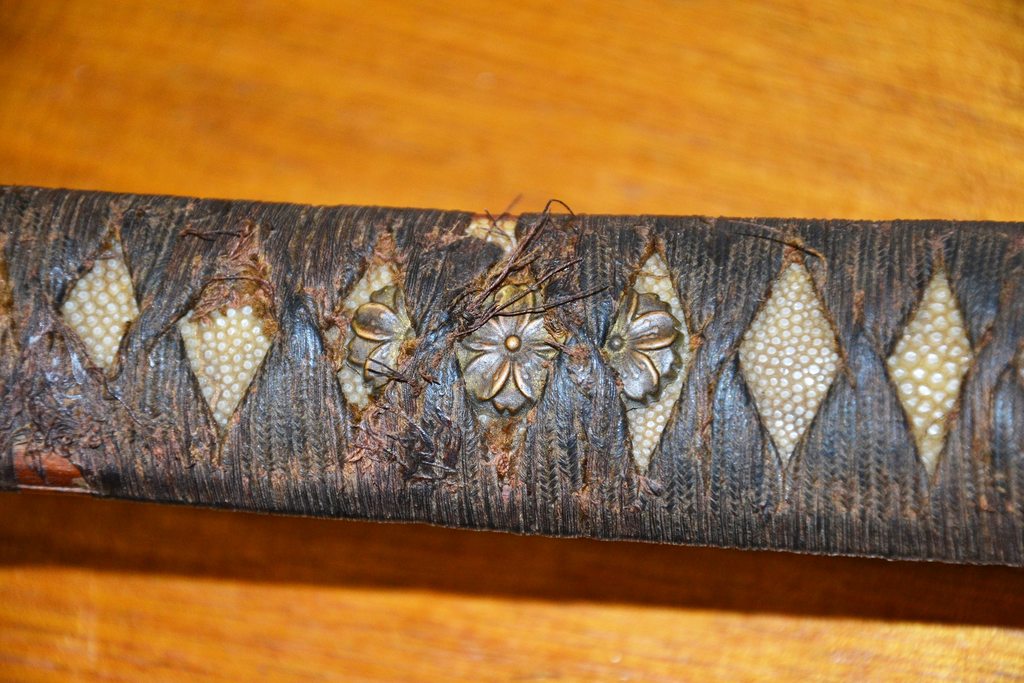 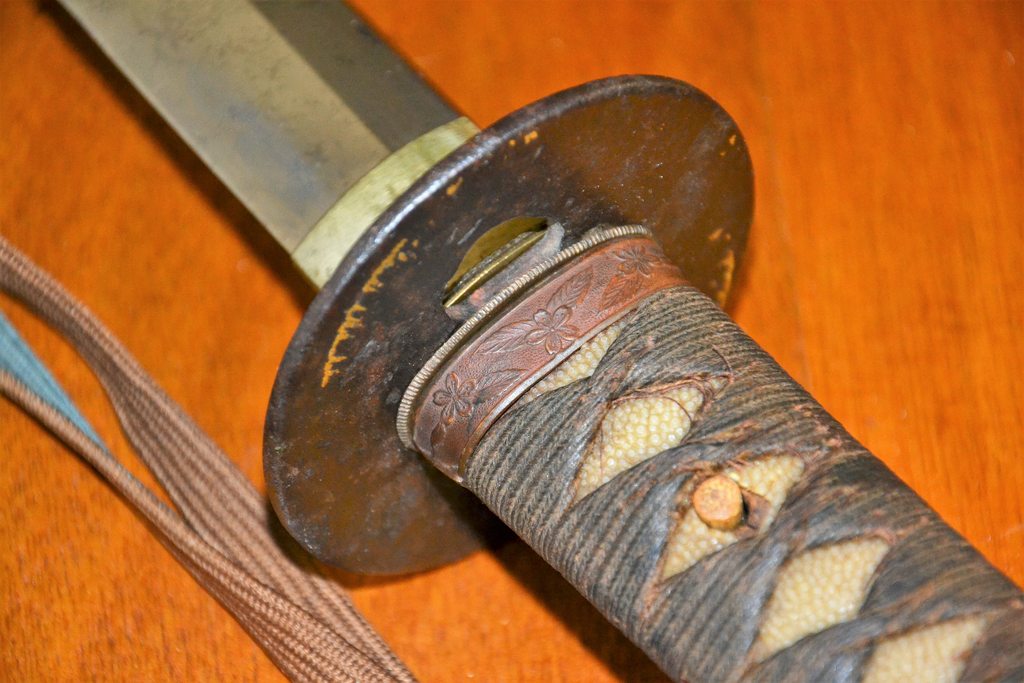 The tsuba is not of the usual army type either. 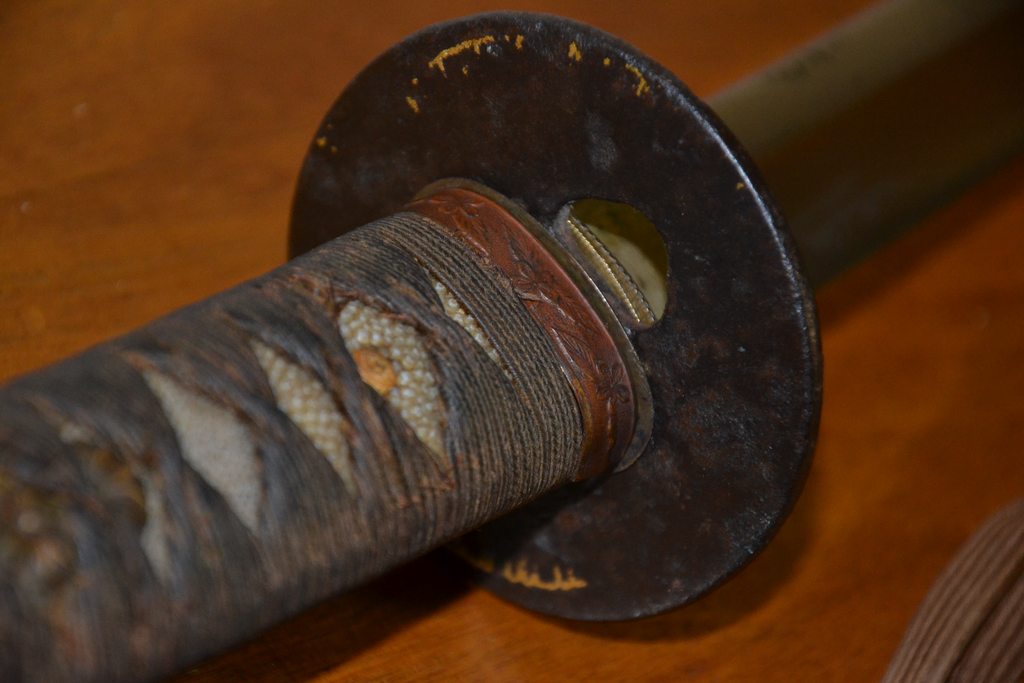 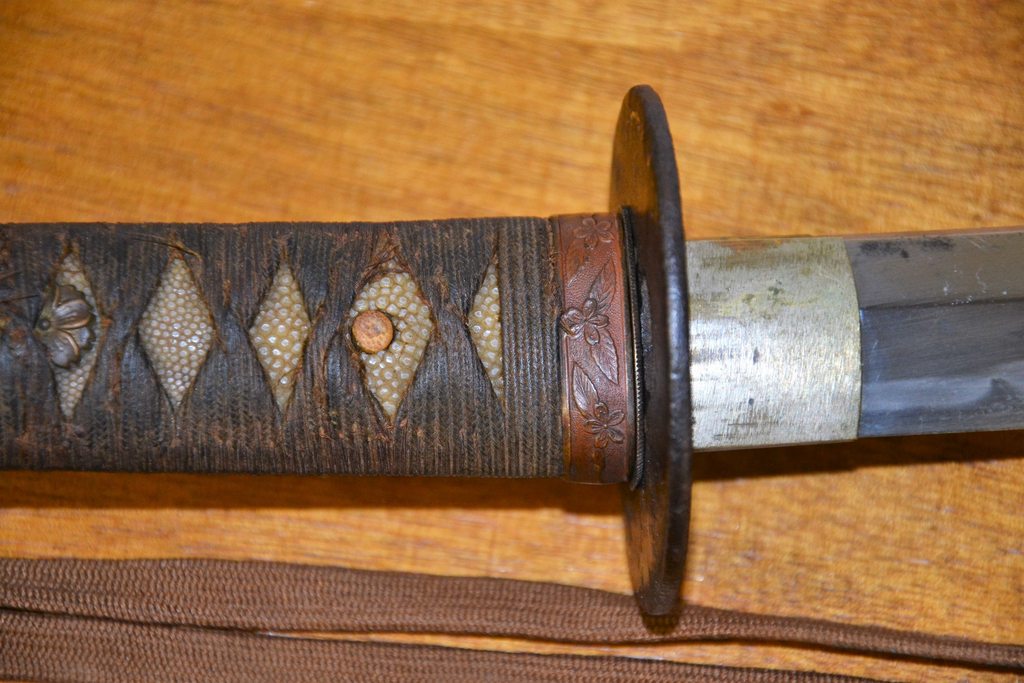 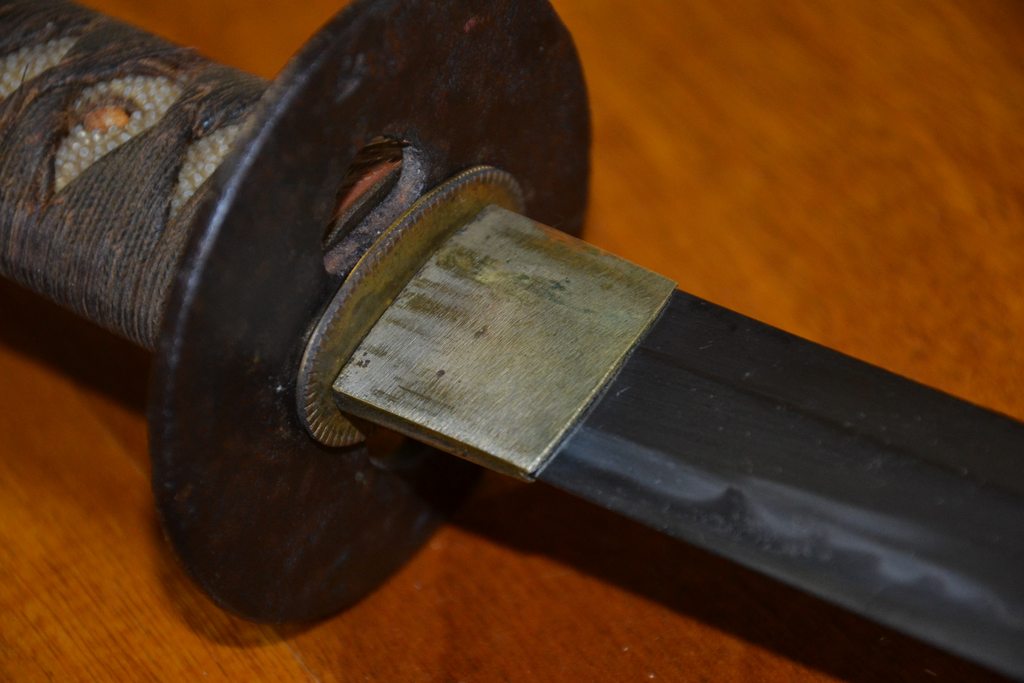 I was told these whitish fogged areas were the result of rust having been scrubbed - do you concur?

The leather saya cover probably bears the name of the US serviceman who "appropriated" the gunto.

Any information you can provide about this gunto will be welcome, as the reason I am posting these pictures is to try to learn more about it.

Missing the leather retention button collar that would sit over the fuchi and pass through the tsuba. These break pretty easily, so no surprise.

Any evidence from seppa marks that the tsuba was switched?

No, I couldn't find any conclusive evidence one way (original tsuba) or the other (switched tsuba). All I can say is that the whole thing (tsuka, fuchi, seppa, tsuba, habaki and blade) is a tight fit, although the tsuba tends to have a slight lateral wobble when you try to force it with your hand. Other than that, it does sit comfortably on the blade.

Lots of WW2 Gunto turn up with iron tsuba.

Is there any evidence the iron tsuba re-used on gunto in those days could have been something like family heirlooms?

Very possible. Family blades were mounted for military use and sometimes the only addition was the combat cover.

What I would also like to know is whether the koshirae is consistent with a 1940-made blade : the kabuto gane is of a simpler model than the more usual one (no cherry blossoms and no leaves on the sides), but the same is made of rayskin and the menuki and fuchi seem pretty standard. Overall, I would say that the whole of this set-up doesn't look late war, but I am sure some of you on here have a clearer idea of the chronology of gunto koshirae.

I imagine the choice of a simpler kabuto gane with an iron sarute and of the iron tsuba (if it is original to the sword) might have been dictated for the sake of economy, as, if I understood well, Japanese officers had to pay for their own swords. 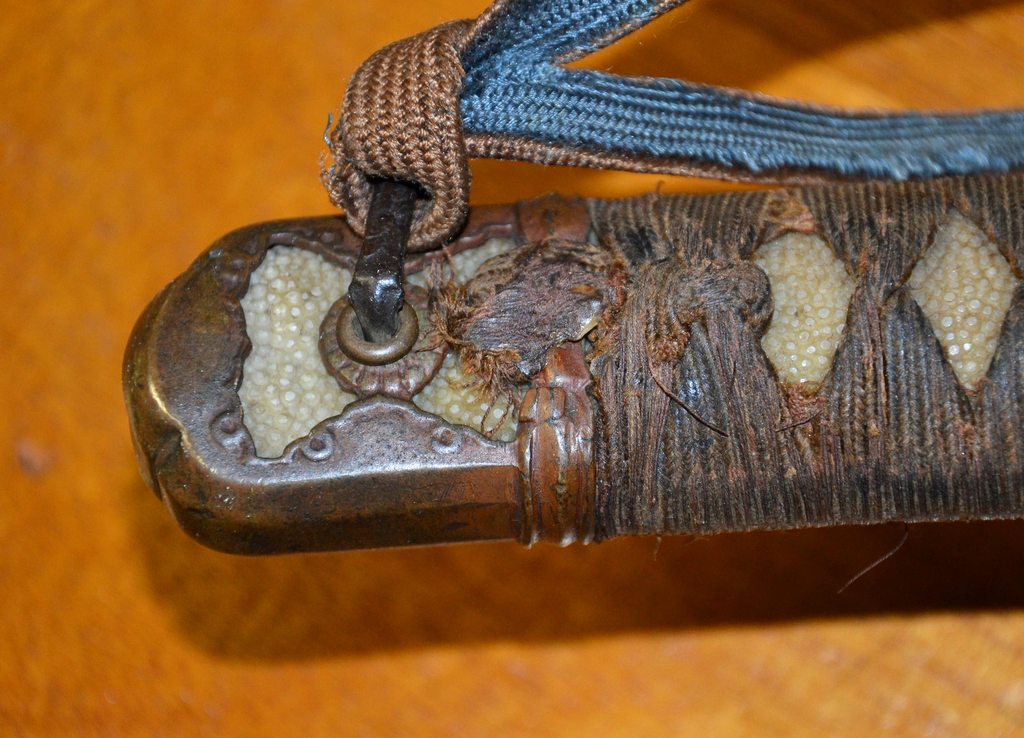 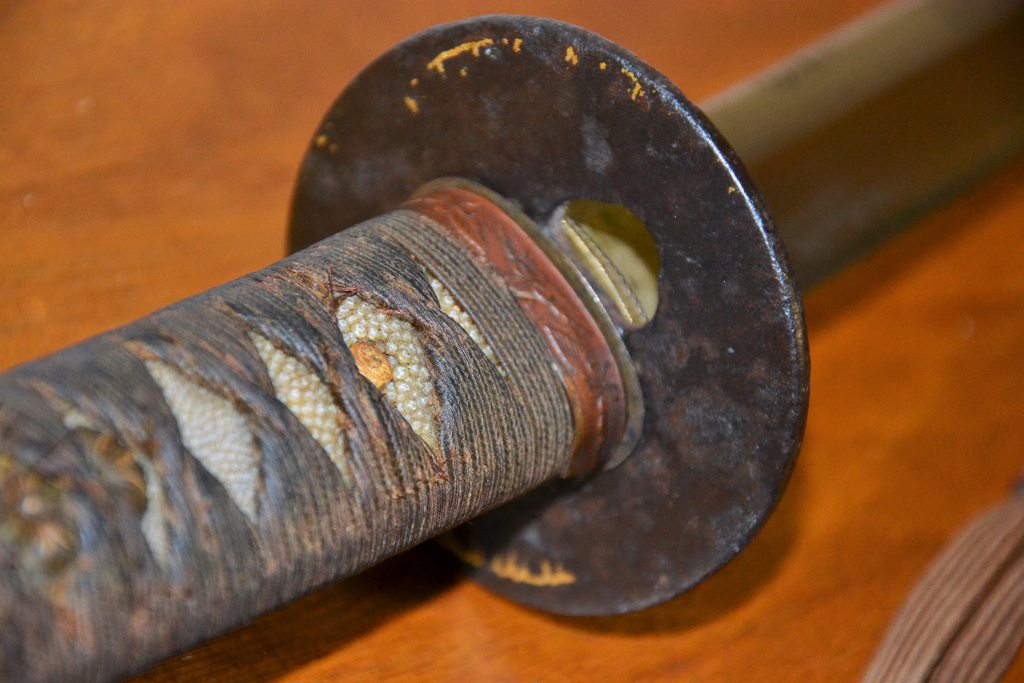 The truth is, mostley the swords were puzzled together after war to fit.

Yes, I suppose this was (and still is) common practice, but, if we exclude the tsuba and the blade (and maybe also the fuchi), the tsuka and its kabuto gane, together with the ito, the menuki and the same, can't have been put together after the war : the poor condition of the ito and the fact that it goes through the kabuto gane wouldn't have made that possible - the question I am asking is whether this set-up can possibly be dated to the beginning of the Second World War with any certainty.

Regarding the possibility of a post-war put-together gunto, the J R YOUNG inscription on the saya leather cover would point to the contrary. 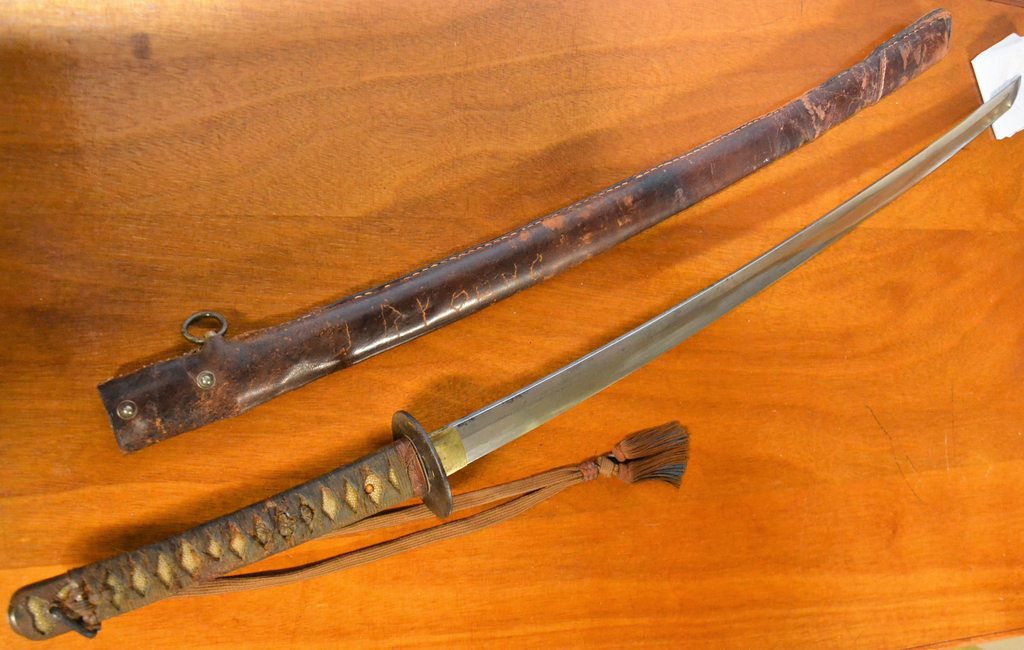 Of course there is no telling whether the one element or the other is actually original to the blade, which is the reason why I am asking NMB members to tell me about the overall consistency of the sword as a whole.

On another note, I have noticed that there is, aesthetically speaking, a parallel between the iron sarute of the (formerly) brown-painted kabuto gane and the equally brown fuchi over the iron tsuba, in the same way as brass sarute are often associated with the regular brass army tsuba.

The truth is, mostley the swords were puzzled together after war to fit.


I completely disagree. Most swords come from veterans as they were obtained. Some dealers or individuals certainly changed parts, but I think saying most is a gross misrepresentation.

Simple test, give the sword a good shake, does it feel firm, or rattle. Parts swapping does go on, but is usually done when the original mounts are badly degraded on an otherwise good blade... And most often, traditional mounts retro fitted to an old blade found in Gunto mounts. Swapping is also usually a quick and dirty job, done without care to move a piece on quickly for a profit.

Myself, I remount blades that have been stripped, so that they are swords again, rather than bare blades. There are a lot of orphan blades out there, that need the love!

Dave, I have just tried your test : no rattle at all, everything is tight as can be. 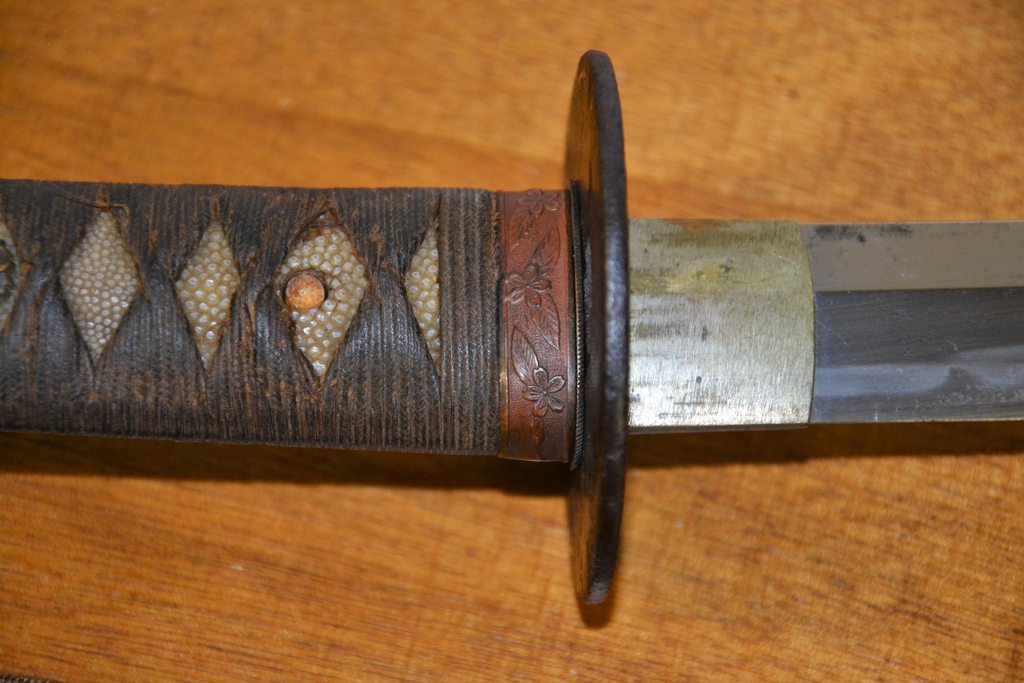 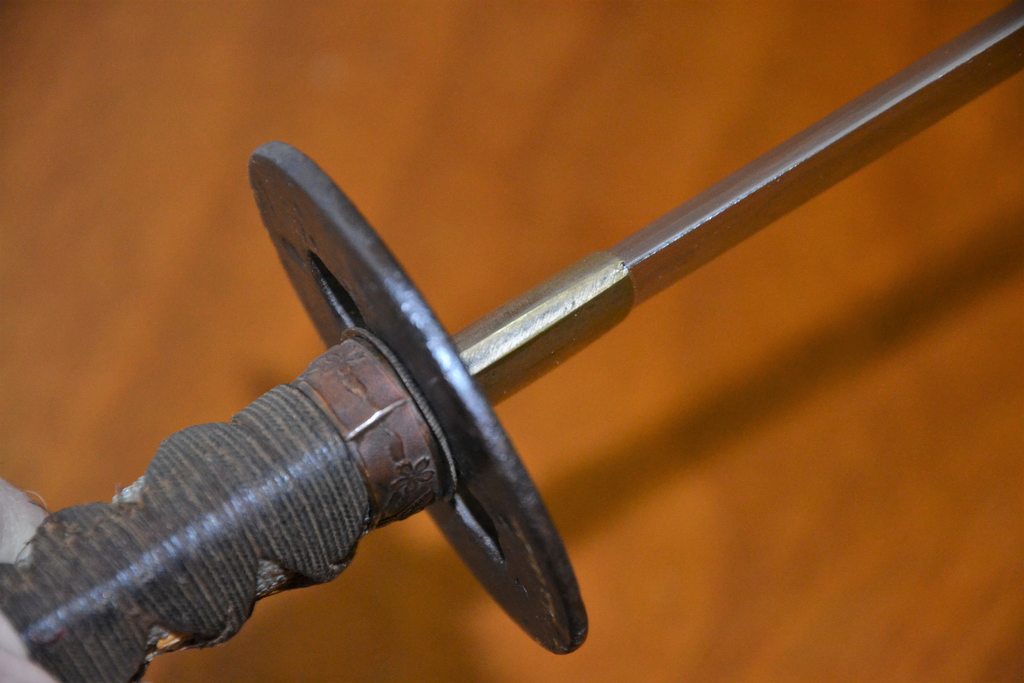 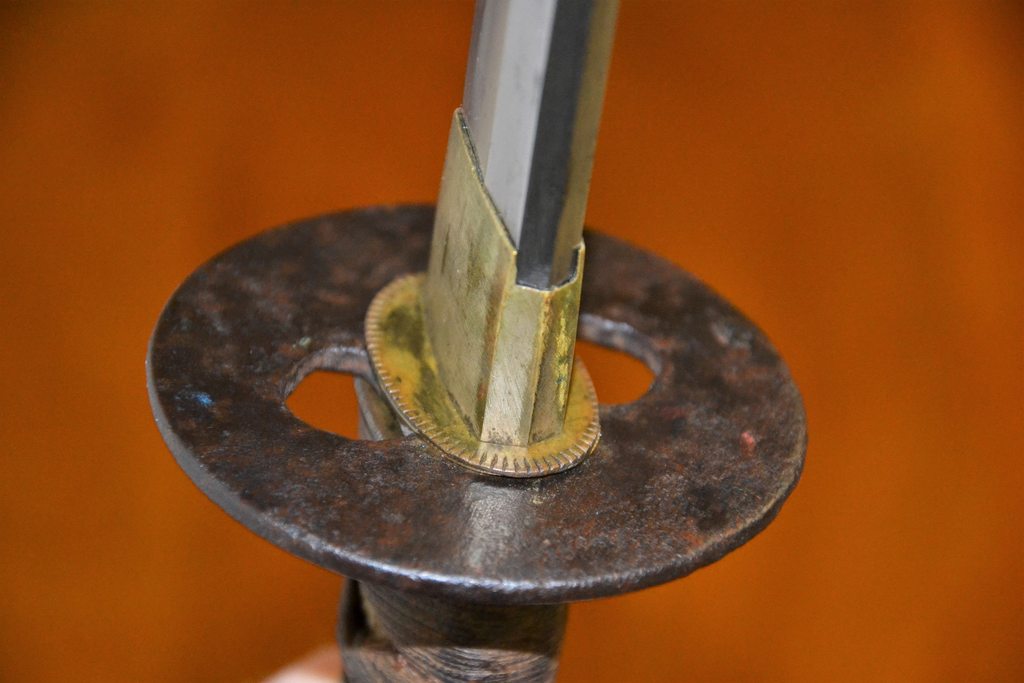 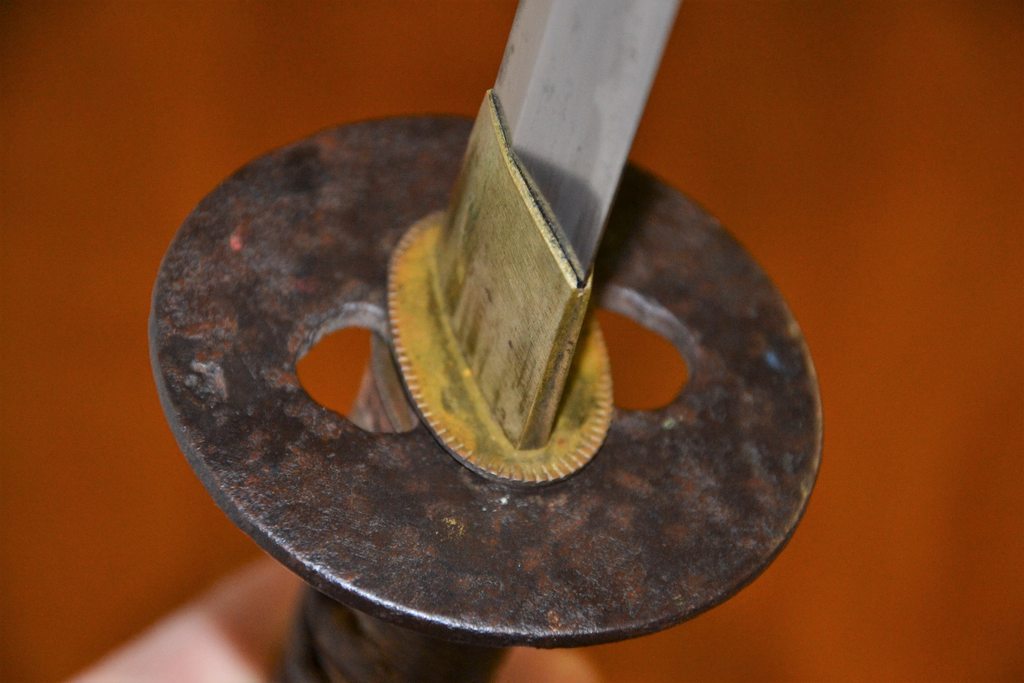 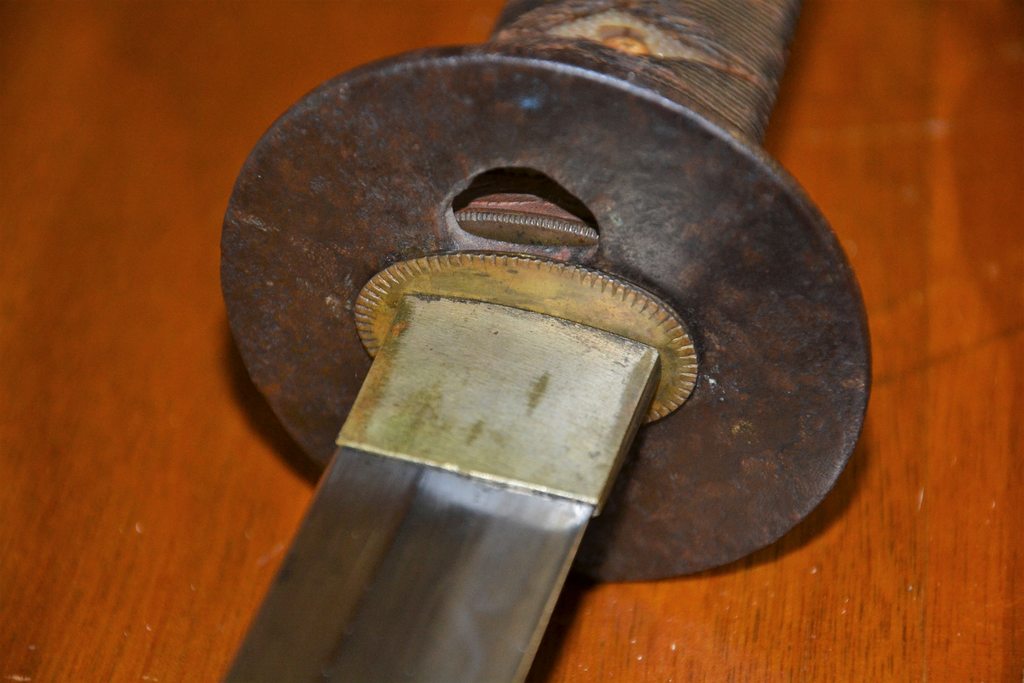 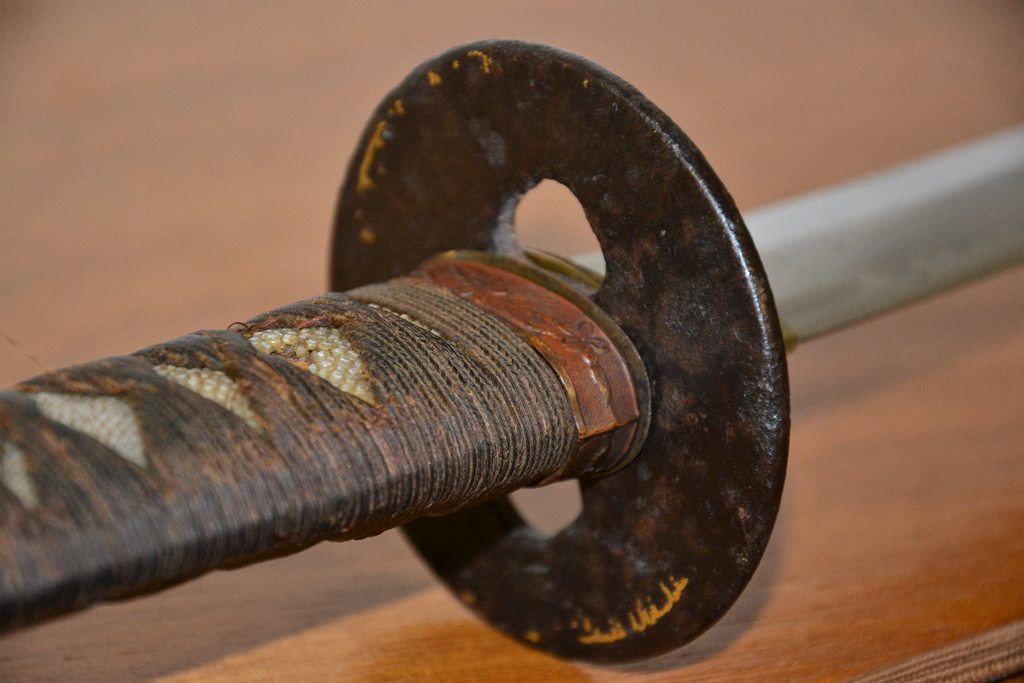 I see no issues with this sword at all. Regarding plain mounts with same under the ito, this is a koshirae I bought from Japan. Originally just to use as a model for when I repair and reconstruct. 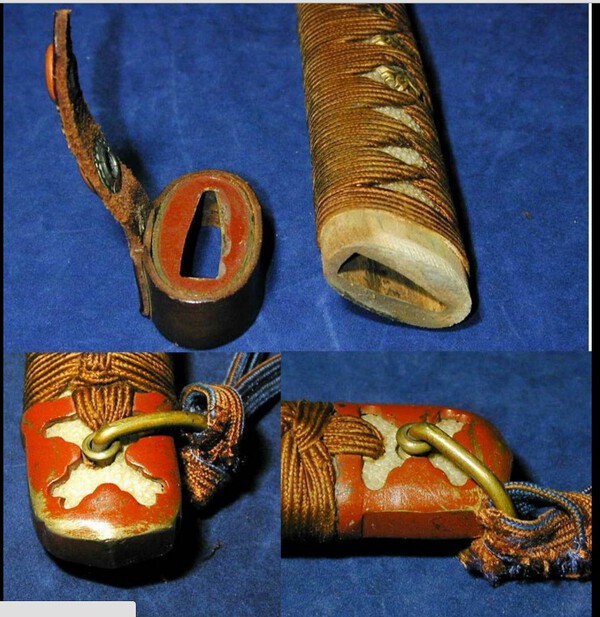 I have also studied the scabbard more closely : it also seems to be original to the sword - made to the exact dimensions of the blade and, more particularly, to those of the habaki, with no wobble whatsoever once the sword is inside.

Does anybody know whether gunto scabbards are interchangeable at all?

Photos of a family blade adapted for service.

Very interesting indeed! I suppose the "civilian" saya has merely been protected by a leather cover fitted with a hanger before going to war. Mine is a different case though, as the blade was definitely made in Seki.

I see that both your tsuba AND your sarute are made of iron, so I may be right in assuming that matching them instead of having a brass sarute and an iron tsuba on the same sword might appeal to Japanese taste. I was beginning to wonder whether the sarute on my gunto had lost its former gilding.

Didier, on close inspection of your great photos, I suspect the iron tsuba is a non original fitment. Why? Because in my experience the seppa never over hang the hole where the leather securing tab passes through. The seppa are normally relieved (filed) to match the hole in the tsuba. See photo.

Well, I am not sure there ever was a leather securing tab on this sword - the buttons would not have been level with the hole, to begin with, and I suspect the leather flap of the cover was cut, maybe, as was suggested to me, to get rid of information (name, unit) written on the inside of it. The remaining leather was glued to the saya to prevent it from leaving an ugly opening there.

Here are some "fresh" pictures : 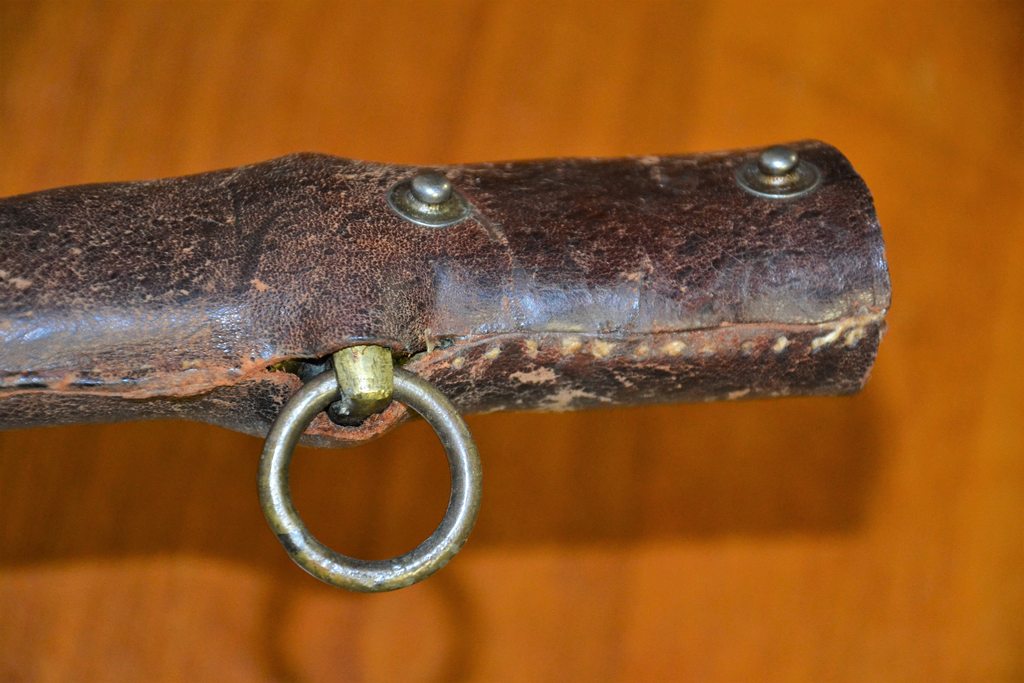 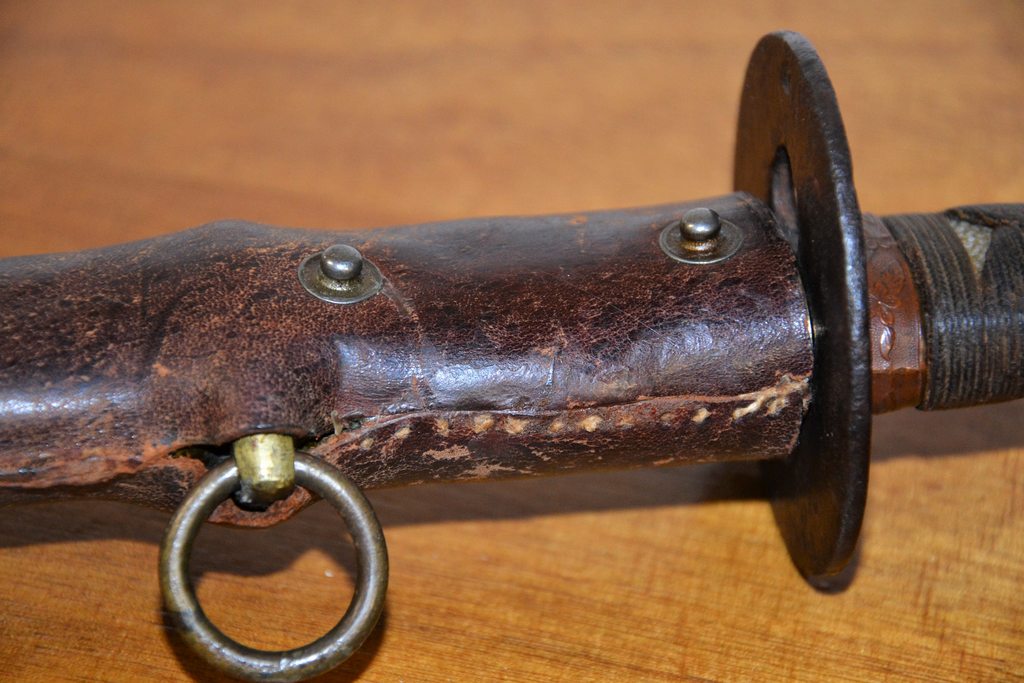 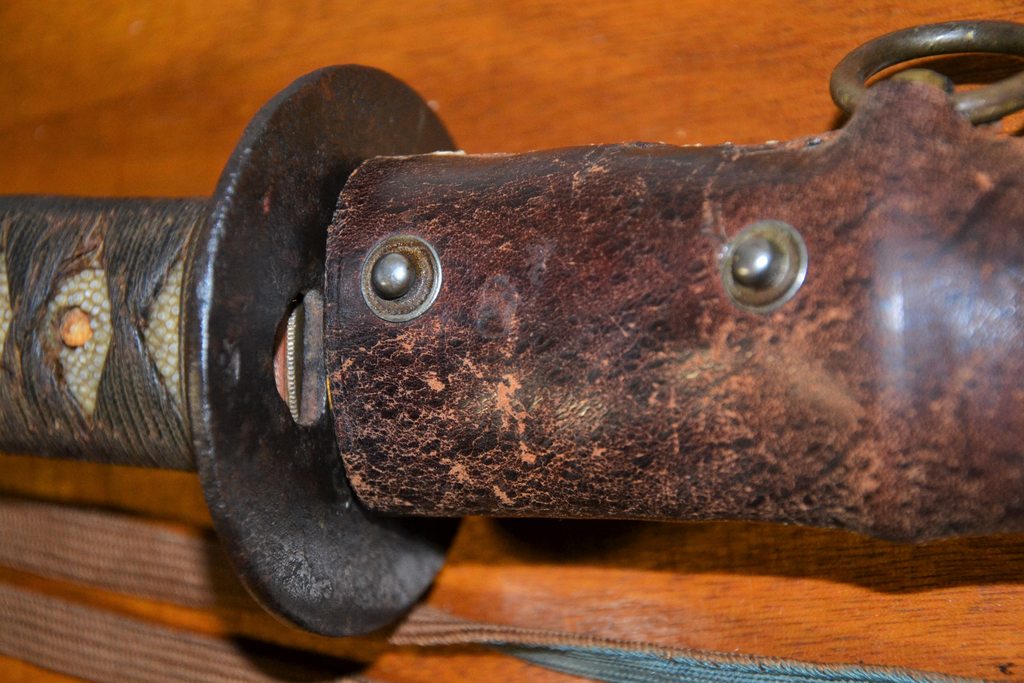 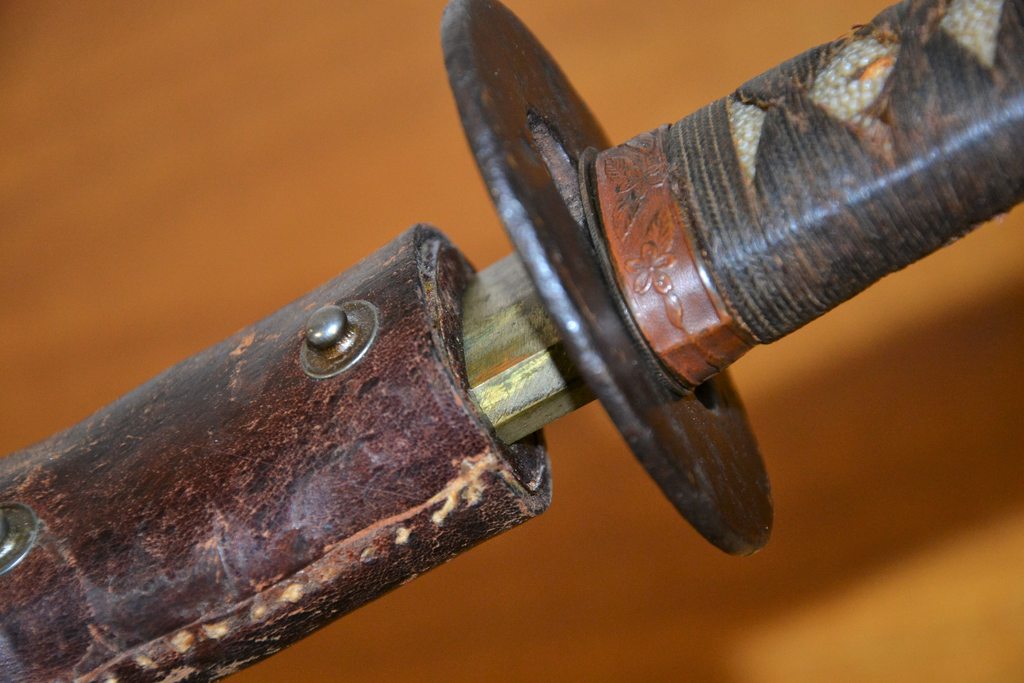 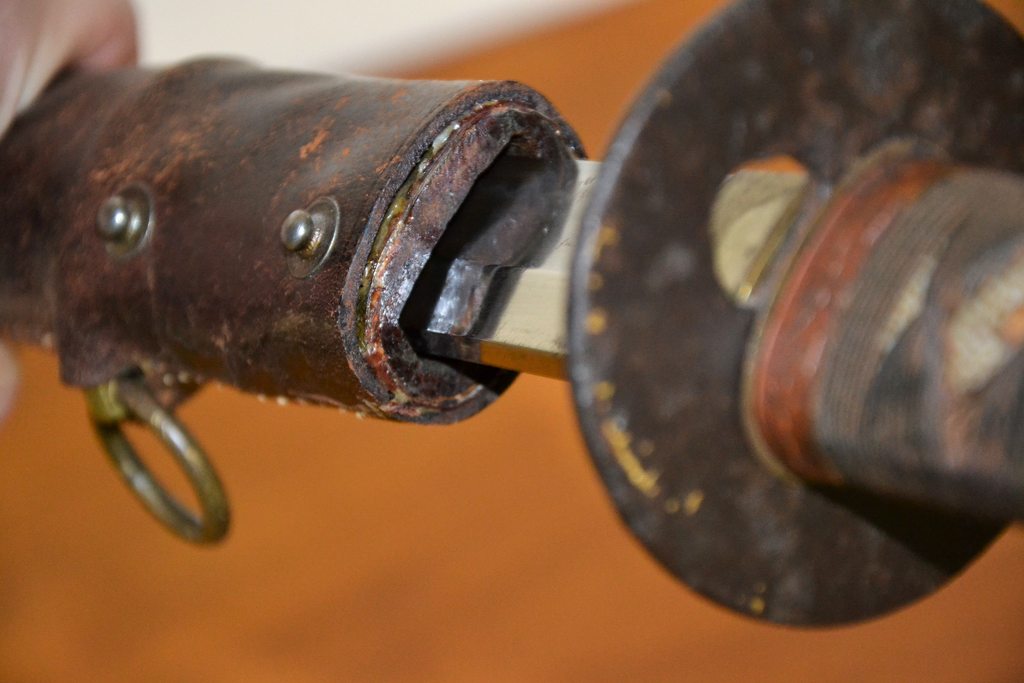 I bet there was a Gunto Tsuba with a leather Seppa and one Seppa with flatend Kozuka ana.

I bet there was a Gunto Tsuba with a leather Seppa and one Seppa with flatend Kozuka ana.

If that were indeed the case, where would the leather securing tab have been attached to the leather cover? From the way the blade fits into the scabbard (tight fit), the saya does seem to be original to the sword, and I don't see any reason why a seller would have associated it to this sword if he had wanted to make more money out of it, as this leather-covered scabbard is not particularly appealing to the eye.

Maybe an indication that the seppa which is closest to the habaki is the original one is the fact that the tarnish on both of them seems to be rather uniform. I cannot imagine that this isn't the original habaki, at any rate.

You have to remember that packing a sword with the tuba mounted makes for a somewhat bulky package. It was often easier for the soldier packing his souvenir sword for shipment home, to remove the tsuba and store it separately from the blade. In that case, the tsuba can easily be lost and a replacement added later. I once bought a WWII Japanese sword that was missing the tsuba for perhaps that very reason. That is one possible explanation for a replaced, non military tsuba on a WWII military sword. On the other hand, I also once owned a fully mounted IJA sword with an older, traditional iron tsuba that seemed entirely original to the sword much like the sword you have Didier and the one Neil showed in his post. Unfortunately, swords can't tell us what happened to them, so as collectors we have to try and figure out what might have happened. To me, your sword looks totally original so enjoy it for its non-regulation tsuba which can also be thought of as an homage to the samurai warrior of a previous age.

Didier on this picture is see 3 Seppa in the fittings. Some one has put a nice NCO Tassel on it. 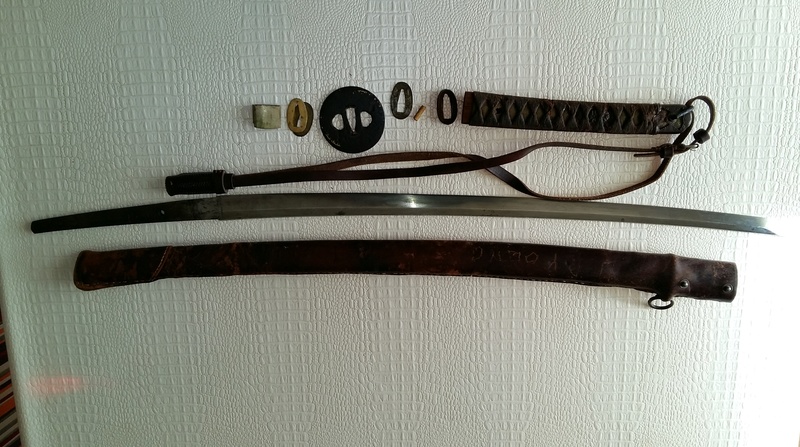 I would say that the blade was fitted as Type 98 Gunto. The Seppa are to different to each other. Take it as it is.

Btw. The NCO Tassel is interesting for me.

Thank you very much, Ed.

Of course, making sure that my sword is in its original configuration is of primary importance to me, because this will allow me to retrace at least part of its history - most nihonto lovers will tell you  that "a blade speaks for itself", but, as far as gunto are concerned, I feel that every single element - not just the blade - has a story to tell.

Didier on this picture is see 3 Seppa in the fittings.

I would say that the blade was fitted as Type 98 Gunto. The Seppa are to different to each other. Take it as it is.

Chris, there are indeed three seppa in all, and I must say that I have suspected the shiny one to be a replacement or a later addition.

I have taken for granted that the NCO tassel was a copy : it looks brand new.

This is the NCO tassel replica that came with the sword when I got it :

Didier
Back to Military Swords of Japan

Also tagged with one or more of these keywords: gunto, showato