23 replies to this topic

Hello all,
Can someone or anyone please tell me a little about this addition 2 b!? Problem is that all i have is his description/photos of sword thats it.
It's in transit at the moment. and I'll post better when in hand.ta 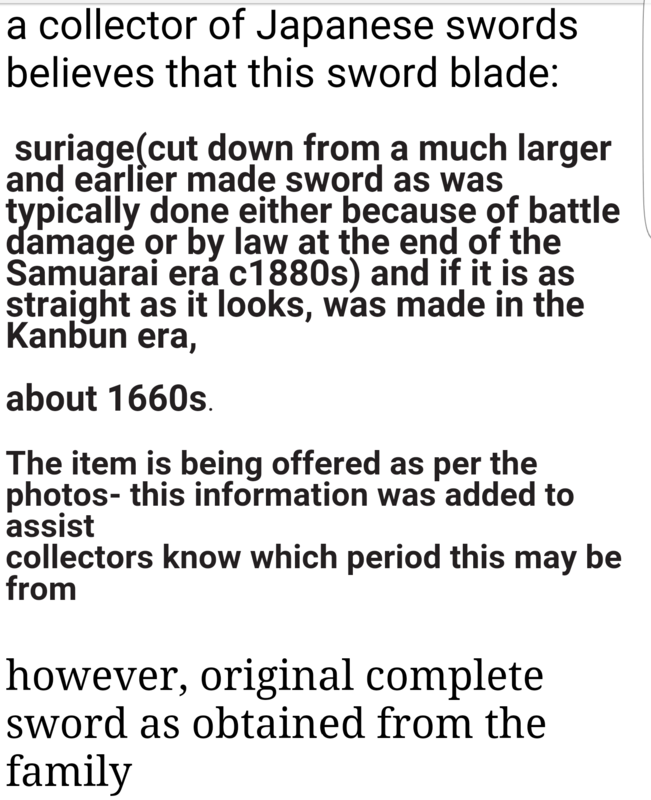 Any info. would b great, i dont have much.
Ta

Is this a cut down no-dachi!?? which lost mei/date in change??
Any thoughts?
Ta.

Hard to see much in the photos regarding hamon, boshi etc. but what I do see is a wakizashi in some plain but rather nice mounts that will look much better after some TLC.  I can see little to suggest that this is anything other than a mumei sword of original length.

I wouldn't automatically think kanbun. I also wouldn't assume this has been shortened. I wonder what law the author of the blurb is referring to when he/she says "by law at the end of the samurai era". Looks suspiciously like a guntō without the arsenal stamps. Blue tsuka ito looks strange for a gunto. The fittings are an absolute hodgepodge of styles, which is not normally a good sign. The resolution of the photos doesn't allow for any much more informed commentary. Not from me, anyway.

cant see much but I dont think it is a showa blade. The nakago looks wrong for a gunto. With the lack of detail in the images it is impossible to say what it is with any confidence but I would guess it is a shinto blade fitted out with a random set of fittings. when that was done is anyones guess.

I wonder what law the author of the blurb is referring to when he/she says "by law at the end of the samurai era".

The Written photos were screen shots of sellers info on it, all he had. Managed 2 secure for a low price cause of mismatch,and will have it in hand within a week,then for sure posting better shots.
The bloke even said'whats the hammon' 'dunno thats how i got it off a ww2 bloke long ago. I collect coins' he said, 'only was after his coins/medals, bought it all off him''its hung on the back wall ever since' he recons his miss's is making him get rid of the 'Collection' so called.
Let you all see when i get.
Thanks for replies.

But that didn't require anybody to cut up their swords.

Totally agree with you Steve.

For what it's worth I think the koshirae is simply a handachi, all the fittings seem to be consistent.

think its a bizen blade from mass produced era late 1500

Now we are talking hotshot - my impression exactly.

Definitely sent yesterday,4-5 day transit. Got pic of saya from seller. Again sorry,all i got off him.

And I found this..

Only mismatch is the wakizashi in the longer saya,Uchigatana.
This sword, may of Possibly been,orig.cheaper option to Datio set
Who knows!?
Thanks 4 the replies
Keen to see

Thank you for mediating the cultural differences on this little island John.

So back to wakizashi. Kurt you may of course assume that the sword belonged to whoever you like but there are one or two things to consider. You mention that it was just a little longer than normal wakizashi length. What had you considered normal? I ask because I seem to have them in all sorts of lengths. As we have already established that some daisho occur with the dai below what we would call katana length it appears that the standard lengths we work with were at best disregarded by a lot of people.

It is not too uncommon to find a sword mounted in a saya that is much longer than the blade length would dictate though I have usually seen this in wakizashi which have had a tanto blade mounted. I saw one of those recently and if I can find the link I will post it. I think that we are chasing moonbeams if we try to assign swords to a certain class of owner based on any of this. We know that daisho were the badge of office of the samurai, for at least most of the Edo period. We can guess that certain other koshirae were worn by samuari because of their good taste but as most of us really struggle to identify what good taste is now, never mind for a Japanese at any period of history, we are probably in the realms of fantasy. If you don't have it the catalogue of swords in the Tokugawa collection is interesting here, all sorts of mountings.

If we say that significant numbers of high quality wakizashi were produced in a period of Japanese history because of the growing wealth of the merchant class then we are talking about the blades, and by the way commending them for their high quality.

Really can't comment about ninja swords as I thought they were all black with dirty great big square tsuba to act as ladders and nearly straight.

Hope you approve Stephen, now I'm diving for a nice comfortable hole in the ground.

Quote'only last post is what i found from 2014 forum not my words. Just saying my bit,to make sense more, different saya is commonly seen. Is it not!?? The sword is bought from a not so' knowledgeable bloke in nihonto,but, he is a man of word,a friend of my fathers(dad swears). I didnt know he had the sword until the day i over heard a conversation between 2, he told my father that he was selling his whole collection cause him and wife were splitting-house 'n' all.Gone
U c my dad collects coins...conversation went for a bit then my ears pricked to my dad said 'sword'...
Rest history mine now, dad spoke with him and he says' he's had it 4 a while, got it this way off a ww2 army bloke (couldn't remember the name) and has had it for a long time(thanks dad 4 finding out earlier!😡 he's collected off him 15yrs!)
Anyway all good apparently.how it is,was the way it was.
Either way didn't even cost Me $300..

Can't wait turns up 2moro,
Will post better pics then
For what its worth found also bit of info. on possible koshirae mount references..
Just a thought, or could be a secondary with wearer preference of koshirae..got told exact length 54.5cm -1 shaku 8 sun.

parallel to the rigid social hierarchy, structured in classes, which cemented further during the Edo period, clandestine organizations and outlaws emerged in a significant number. For example, there were gamblers ( bakuto , 博徒) and pushers ( Tekiya , 的屋), who had rigid internal codes that make them the predecessors of the modern yakuza . "Heroic" members of these groups who defended the "poor" citizens against unlawful and arbitrary acts of samurai premises were Latinized as k yōkaku ( 侠客), literally "cavalrymen." Obviously these k yōkaku did not follow the law because they saw themselves as the "Robin Hood", wore a longer blade than was possible (usually in style handachi ), a wakizashi (see Figure) that it was not called ō-wakizashi, but naga-wakizashi ( 長脇指·長脇差) in this context. To restore local peace, bakufu sometimes had no choice but to grant the leaders of these "organizations" certain rights so that they were at least able to keep the other underground groups under control, and one of these rights was allowed to bring a naga - wakizashi instead of a ko - wakizashi . As you can see, the bakufu sometimes preferred to turn a blind eye on some things as long as they were not disturbed by them. Among other things, these k yōkaku were thus also known as Naga - wakizashi , ie "those with the long wakizashi ". Because these naga - wakizashi were the outer appearance virtually identical to a katana, as well as terms ipponzashi ( 一本差) and ippongatana ( 一本刀) began to be used to refer to k yōkaku . These terms should be understood as an allusion to the term nihonzashi ( 二本差), literally "the two blades" or "carriers of two blades," which was another term for a member of the class samurai .
Thoughts or comments..
More pics soon

Finally got it. See pics wasn't as long as told only bit over 53cm nagasa, still long wakizashi.
Blades ok for the price, koshirae fair and well used but seems to gel together.
Got a bonus i didn't know was there + seller didn't mention, was a signed Tsuka, not fancy but cool. Need translation on it and will post in right bit, but 4 now check out blade..any comments or thoughts??

Mark L
Back to Nihonto

Also tagged with one or more of these keywords: katana, gunto, gendaito, showato, wanted