Show Us Your High Class Gunto

Hi guys, with the slow pace of this thread, I have decided to steal/borrow a simular themed from tosugu.

so how us your minty military gems.

surrenderd in Burneo 1945 with full documation on both sides

PS, I know your going to say its not a gunto, but you get the idea

Wow!  That Kyugunto is really something!  What school / smith do you think it is from?

Shin-gunto Gimei Tada Yoshi housed in a quality rayskin saya with nice ishizuke . Nice bronze tsuba  with kitau type stamps and remaining gilt . Long nakago with what appears to be a field replacement leather sarute..Nice history with this sword.....surrendered to a British major who subsequently bequeathed it to the regimental museum who unfortunately had to sell it to raise funds..

Another nice quality shin-gunto signed by the 23rd generation of Kanefusa . Blade is housed in a nice lightweight saya the kuchi-gane has the patent stamp as found on page 33 of Military swords of Japan 1868-1945 by Fuller and Gregory. Tsuba has evidence of gilt still present . A very nice sword with a very ' balanced ' feel..

I don't know if i have a high class gunto. I love my little collection. 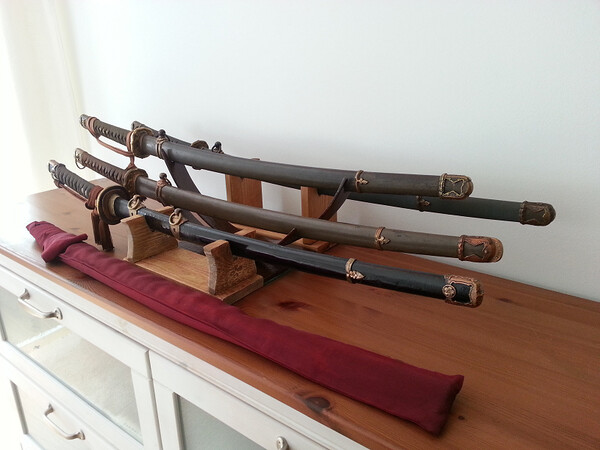 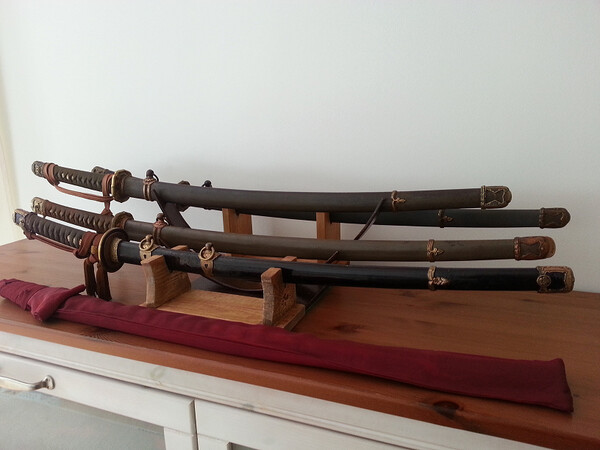 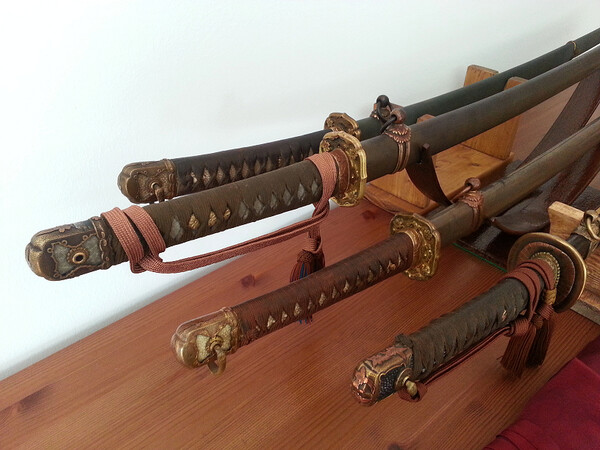 All are very beautifull. Great stuff!

Hamish - I'm lovin' this! Thanks for starting the thread!

Martin - Have you gotten the Ka-mon translated? I found the bottom character is "Murakami", a Samuri name from old, but I don't know the top 2 characters.

I greatly regret selling this one. It was a beautifully made gendaito by Sa Nobumitsu with an exceptionally nice nambokucho style sugata with o-kissaki. Hopefully it's in good hands today.

Martin - Have you gotten the Ka-mon translated? I found the bottom character is "Murakami", a Samuri name from old, but I don't know the top 2 characters.

Bruce - I've been using my "Japanese Art Signatures" book for several months trying to figure it out. I can't seem to come up with anything that makes sense. I'll keep plugging away at it though!

I greatly regret selling this one. It was a beautifully made gendaito by Sa Nobumitsu with an exceptionally nice nambokucho style sugata with o-kissaki. Hopefully it's in good hands today.

Ray,  I'd regret selling that one too!   Great looking blade!

Michael's  Shodai is very interesting, with what im 98% sure is in type 94 mounts (getting rare now days).

if you could please post more pics please, that would be great.

Thomas , I admire and covet both of your Kyu Gunto. Could you share with us what the blades are ? Ian Brooks

Here is a nice Kaigunto that I have.
Frank R.

Thank you for your kind words.

"Only" one million yen but as someone else once said, take those ratings with a pinch of salt. I think Chris Bowen in a previous thread mention him as one of the best smiths of the showa era and I'm bound to agree. If interested here's a link where this sword is discussed.

This goes to show what's said so many times before, don't buy because of ratings, fame or name alone. Each sword must be judged on its own merits.

Come on guys let those nice Gunto of yours coming.

It must be a quirk in my personality that causes me to look at scratchings on seppa and writings underneath fuchi on shin gunto and Kai gunto.

Whilst I have seen one sword where the swordsmiths name was scratched on all of the seppa as well as on the tsuba, the impression that I get is that these scratchings on seppa whilst often numbers are occasionally the owners name rendered in (usually ) katakana .Unfortunately it is hard to prove this as the sword usually has no surrender tag with it that gives the owners name so that this can be compared with the name in the scrathings.

Similarly a number of swords have characters written in ink on the wood under the fuchi . Whilst these are often numbers, names also occasionally appear. Whilst it is possible that these are the names of the hilt binder or the person who put the sword together my suspicion is that these are also sometimes the owners name.

Some years ago I saw a kai gunto with an accompanying surrender tag that gave the owners name as Captain Ikeda. The name Ikeda was also scratched on the tsuba and was written in ink on the wood underneath the fuchi. I thought that this was reasonable evidence that these scratchings and writings are at least on occasions the owners name.

Does anyone else out there look at this minutia ?

I recently saw a gendaito in gunto Type 98 mounts and it had the owners name written in ink on the brown side of the tassel...it was written in katakana...a Japanese name (forget what it was now) but strange to see it written in kana.

And yes, I notice all those things you mention. I have a gendaito by an unknown maker "Shigekuni"...(maybe a modern member of the Nanki line?). It is a very nice sword (Type 98 with silver habaki) and it was surrendered to the Aussies on Halmahera in 1945.

The chap who apparently received this sword must have asked the original owner his details, or perhaps a Japanese prisoner translated a surrender tag for him, but anyway, faintly visible on the side of the BLADE (darn) just in front of the habaki is the scratch marks of a fountain pen with small traces of ink still present...it says in English

Research shows that this is the 32nd Div., 2nd Army of the 2nd Area Southern Army (Gen. Inami) that was at Halmahera (N.E.I. Moluccas) at the close of the War. It consisted of the 210, 211 and 212 Tokyo Regiments of infantry. Most sources state that the Division was defeated by the Americans on Morotai (which is true) but let's not forget that the Australian were part of what the American media call an "Allied Force" that fought the Japanese to a standstill. Thos parts of the Division still on Halmahera surrended in August 1945.

It had a silver mon on the kabuto but it has been struck off.

Love my Guntos! Here are mine, all with original leather covers.

Well, my collection is humble. I have but two guntos: a nice gendai kai gunto by Kuwayama Kanetaka in 1944, and a fine kyu gunto with a blade that strikes me as machine made...but is in the kind of mounts I'm told were designed to take older blades. I'll do a thread about the kyu gunto some day, but here they both are, for now.

(Please forgive the modern hangers and sword knot on the kai gunto; I do have an eye out for authentic ones.)

I also have an NCO sword. Is that considered a gunto?

'Pretty swallow cuts,
The dawn falls open in twain...
Sun may rise today.'
--Jim Coomber (myself)
Back to Military Swords of Japan