Recently a thread was started by a new member yoroi-doshi pointing out a Teppo Netsuke that he had acquired. This particular netsuke had as I later found out had been on a Japanese Auction site I believe the auction site is called Ameba ... here is a link : http://ameblo.jp/jrp...1938831336.html. It was subsequently listed on eBay.
For those of you who are unfamiliar with Netsuke, ... they were a type of toggle usually with two holes called himotoshi ( although a simple ring was sometimes employed attached to the Netsuke ) for the attachment of a cord from which you hung an Inro ( medicine container ), or writing paraphernalia such as an ink brush container and ink ( Yatate ). or a tobacco pouch and pipe (Tabako Ire and Kiseru ). The Toggle was slipped under the belt ( Obi ) of the traditional Kimono and allowed to hang over the top, thus securing the above various items called ( Sagemono ... literally hanging things ) to be carried about without loss. During the mid to late Edo period and on into the Meiji Period it became the fashion to wear a Netsuke and they became in reality Status Symbols among the Merchant Class. Samurai never really took up the wearing of Sagemono. The subject matter and materials used run of the gamut of most any subject and material. Fine examples today often run into thousands of dollars for these minute accessories. Many are considered fine art.
Among the rarest of Netsuke are the Teppo Netsuke fashioned to look like miniature Matchlock Pistols. Along with all other types of Netsuke, copies or Fakes abound particularly those found on eBay ... Fake Teppo Netsuke abound. I would guess that 99.5 % of the Teppo Netsuke seen today are Fakes.
Occasionally a genuine example will show up at one of the major auction houses and invariably bring a good price. Virtually all of these are however still what I call " tourist " netsuke made during the Meiji Period and exported to Europe as trinkets and never actually worn by the Japanese as true Netsuke.
In the example I am about to describe, ... not only is it a Genuine example but I am reasonably sure in stating that it was not only worn but made during the Late Edo Period which makes it VERY rare As we go thru the photos which the new owner has graciously consented to use for educational purposes, ... I will endeavour to point out the attributes that the example shows vis a vis a copy or Fake.

Ok, .... lets get at it. In the first photograph we see a side view of the Teppo Netsuke. Note the nice even patina on the steel. No artificial rust here. Also note the care that has gone into the detail, ... the nicely formed serpentine, even the cross groves to imitate the iron hammers of for instance the Kunitomo among other schools. Also note the small hole thru the serpentine head to accept a bamboo sliver to keep the match in place as found on many full size Teppo but rarely if ever on a fake. The correct amaooi ( barrel protector in brass ), the sear protector ( Ibo-kakushi ), the washer around the barrel retaining pin ( zagane ). Some or most of these features are not found on a FAKE. Also note the ring below the barrel to attach a cord. This although present on many fakes are often in the wrong place. This one is substantial and correctly placed.

In the next photograph the pan is open revealing a vent ( himichi ), ... just like a full size teppo. In addition the owner tells me that this vent opens directly into the barrel ( something you NEVER see on a fake ).

In the next photograph, the barrel has been removed and we can plainly see the proper and accurate inletting in the stock as well as the bamboo barrel retaining pin ( mekugi ). NOTE: I just had an email from the owner stating in this case the mekugi is made of brass rather than bamboo. My error as they are normally made of bamboo but on occasion brass.

In the next photograph we can see the breach plug ( bisen ) ... and although round ( sometimes also encountered on full size teppo ) even though most are square. The maker has also placed a slot for the removal ( by unscrewing ) the bisen for ease of cleaning.

In the next photograph, we see that the maker has signed his work .... Sadakatsu . A signature on a fake is almost unheard of. Also notice the strength of the signature chisling. This is the cutting of a confident hand.

Finally a photograph giving some scale to this wonderful Teppo Netsuke. This Teppo Netsuke is owned by one of our newest members Mr. Arthur Greenberg ( yoroi-doshi ). I sincerely congratulate him on his find and for kindly giving me permission to do this article. I truly hope he continues to follow the NMB and bring his expertise to our attention. I will follow this article up immediately with some examples of questionable and outright fakes.

As always any errors or omissions are mine alone. 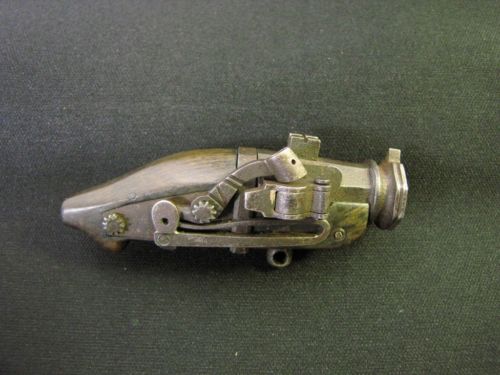 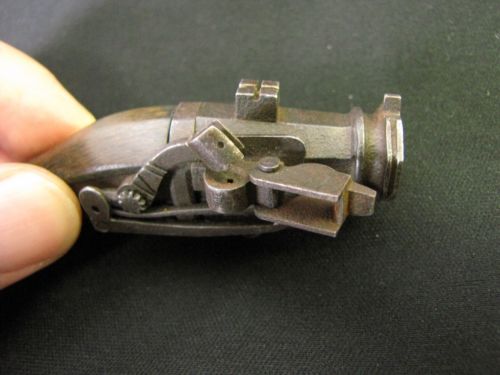 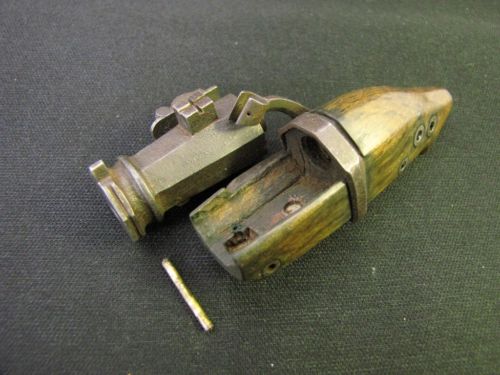 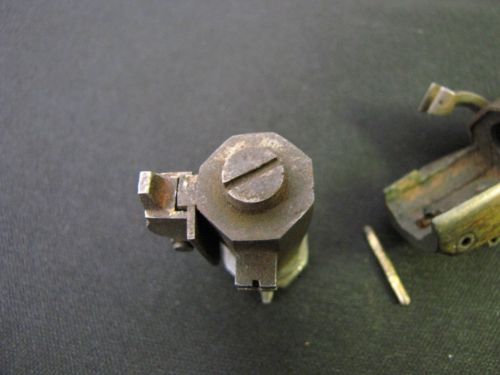 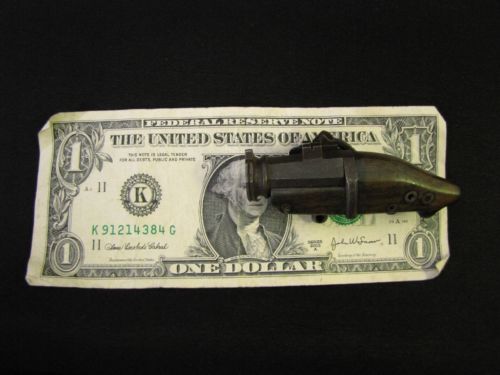 Now for some questionable and/or outright fake TEPPO NETSUKE :

PHOTOGRAPH number 1 is questionable as to being genuine. If genuine it is of the Meiji era and probably made for the Tourist or Export market.
Note the ring is correctly placed, ... but the barrel is not only CAST but the deep pitting and rust ( patina ) is extreme ... leading me to have suspicions.
I would have to remove the barrel to see if this is as badly corroded before I would consider it genuine. 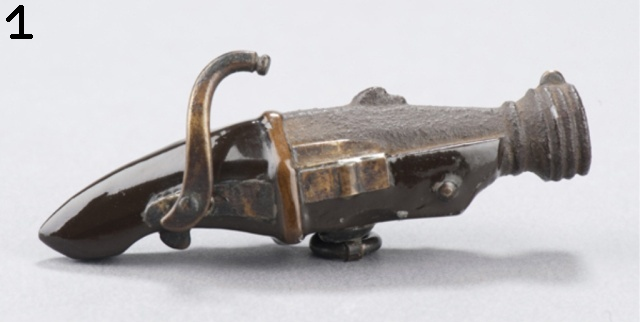 This next netsuke ( PICTURE NUMBERED 2 ) due to the sizing of the photograph does not look quite the same as the netsuke in PHOTOGRAPH # 1, but it is practically identical when not squashed by my shrinking the size of the original photograph. Probably from the same workshop as the previous example, .... certainly no earlier than Meiji and to my eyes questionable until dismantled to examine the underside of the barrel and if as rusty ... then little doubt but a TOURIST piece meant for export and in my eyes not a true Netsuke. 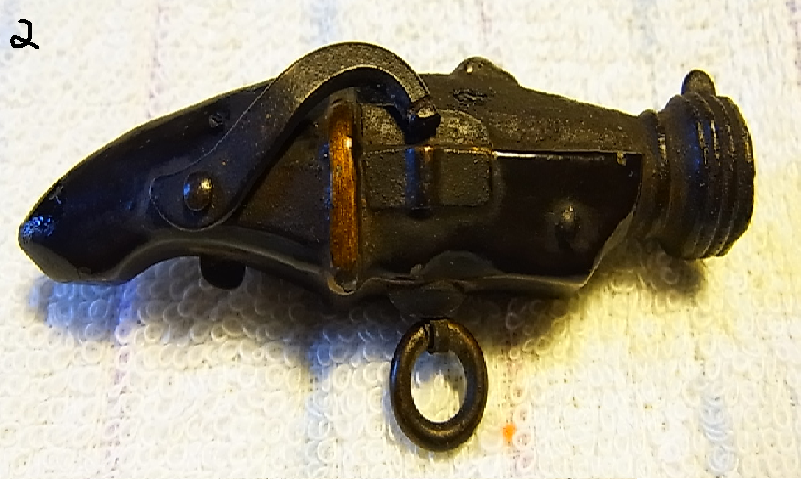 This next netsuke ( PICTURE NUMBERED 3 ) NOTE : The HIMOSHI ( cord ring in this case ) is too far back to have balanced the weight of the Powder Flask ( Sagemono ) in this example, which makes the Netsuke Teppo subject to question. The Japanese Netsuke makers were very careful about how placement of the cord hanging attachment, and this is just wrong. Also, ... the flask has been erroneously drilled ( cord attachment hole ) in wrong place for a powder flask ( the powder is going to leak out and NO the owner stated there is no tube to stop this from happening ). Done no doubt to make a more saleable ensemble. A very suspicious set. 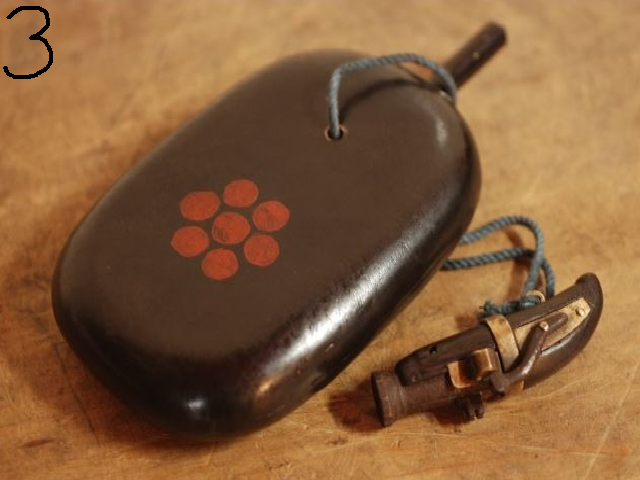 I could go on and on with pictures of questionable netsuke and outright fakes, ... but I think this should be enough to give you an idea. By the way many NETSUKE COLLECTORS would because they want to believe that anything supporting a Sagemono is genuine so long as it does the job and isn't made of resin is still a netsuke would almost certainly call these Netsuke .... SADLY. Thank God, ... Nihonto and Teppo and Kodogu collectors are not quite so naïve.

Now just having an email from Piers, ... I should state that NOT ALL genuine TEPPO NETSUKE are working models. There are many that are of varying qualities. One must judge the workmanship, wear, wear-ability as well before making too rash of a judgement. Thank you Piers for bring my attention to this oversight when doing this article. I have deliberately left out any number of examples which can be found on eBay as although a genuine example shows up ... it would be rare. What you will normally see on eBay are out and outright FAKES made to deceive.

The opinions written are those of myself and perhaps somewhat biased ... but honest in my opinion.